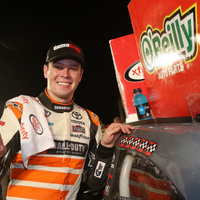 Erik Jones net worth: Erik Jones is an American professional stock car racing driver who has a net worth of $3 million. Erik Jones was born in Byron, Michigan in May 1996. He drives for Joe Gibbs Racing driving the No. 20 Toyota Camry for the Monster Energy NASCAR Cup Series. Jones was the first driver to ever win the Rookie of the Year in all three NASCAR national series. He was the 2015 NASCAR Camping World Truck Series Champion as well as the CRA All-Star Tour Champion in 2011, the Snowball Derby winner in 2012 and 2013, and the Winchester 400 winner in 2013, 2014, and 2015. Erik Jones won Rookie of the Year in the NASCAR Camping World Truck Series in 2015, the NASCAR Xfinity Series in 2016, and the Monster Energy NASCAR Cup Series in 2017. He captured his first career Cup Series win in 2018 at the Coke Zero Sugar 400 at the Daytona International Speedway.