Sadler made his NASCAR Nationwide Series debut in 1995 at the Ford Credit 300 in South Boston. He has since appeared in more than 250 races as of the fall of 2014, finishing in the top ten 127 times and winning ten races, most recently the 2014 Aaron's 312 in Talladega. Sadler finished 2013 in fourth place. He made his NASCAR Sprint Cup Series debut three years after first appearing in the Nationwide Series, racing at the 1998 Coca-Cola 600 in Charlotte. Sadler has finished in the top ten in the Sprint Cup Series 69 times out of 435 races to date with three wins. His last victory came at the 2004 Pop Secret 500 in California. Sadler was named the Most Popular Driver of the 2011 NASCAR Nationwide Series. He won the North Carolina Gold Cup in 1991-1992 and was the 1995 South Boston Speedway Track Champion. Off the track, Sadler is well known for his work with the charity Autism Speaks. He and his wife, Amanda, have two children together. 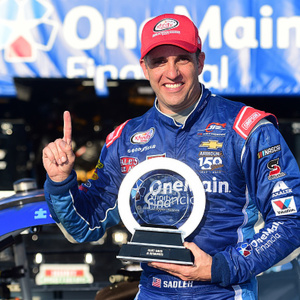