Denny Hamlin Net Worth: Denny Hamlin is an American NASCAR race car driver who has a net worth of $65 million. During his career, Denny has been one of the highest-paid drivers in NASCAR. Between June 2018 and June 2019 he earned $14 million. That was enough to make him the third highest paid driver in NASCAR for the period.

Denny Hamlin was born November 18, 1980 in Chesterfield, Virginia. He began racing go-karts at the age of 7 and worked his way up to Late Models by 2004, signing a development contract with Joe Gibbs Racing. After running briefly in the Craftsman Truck Series, Hamlin drove a full season in the Busch Series in 2005 during which time he also ran a few Nextel Cup races. With some great race finishes under his belt, Hamlin was given a full-time ride with Joe Gibbs Racing. Hamlin started the 2007 Cup season by finishing 28th in the Daytona 500. He won his third career Cup race at the Lenox Industrial Tools 300 at New Hampshire International Speedway. Following that race, Hamlin finished 43rd in the Pepsi 400 at Daytona International Speedway after being involved in a wreck early on in the event. On January 22, 2010, Hamlin tore the anterior cruciate ligament in his left knee while playing basketball and put off surgery until spring. He was back on the circuit within three weeks and had already worked his way from the 28th starting spot to restart 2nd with 13 laps to go at Texas Motor Speedway. Hamlin was later able to pass Jeff Burton on the outside and hold off Jimmie Johnson to get his 10th career win and his second win in three races. Less than three weeks later, on May 8, Hamlin was in victory lane for the third time in 2010 at Darlington Raceway. He swept the weekend by winning both the Sprint Cup and Nationwide series events and thus became the first driver to do so at Darlington since Mark Martin in 1993.

Unfortunately Denny did not reach victory lane in 2018, but in early 2019 he turned things around by winning the Daytona 500 (he previously won in Daytona in 2016). 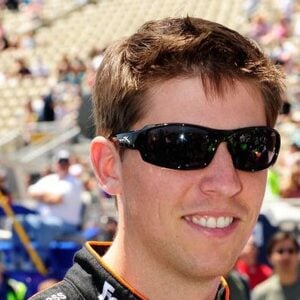