Dennis Anderson net worth: Dennis Anderson is a professional monster truck driver who has a net worth of $3 million dollars. Dennis Anderson was born in Norfolk, Virginia, and began racing in a 1952 Ford Pickup in the early 80s. The truck was later nicknamed Grave Digger, in reference to its black graveyard paint scheme.

He gained nationwide notice after winning a race against, Bigfoot, another famous monster truck, on ESPN in 1988. He has gone on to win multiple races over the years, and now races in a combination mud truck/monster truck, known as King Sling. The vehicle was custom built for him. He is known for going full-throttle until he either wins the race, or destroys his truck. His nickname is "One Run Anderson". He has also been injured numerous times. He was the USHRA World Finals Racing Champion in 2004, 2006, and 2010. He is currently based in Poplar Branch, North Carolina. 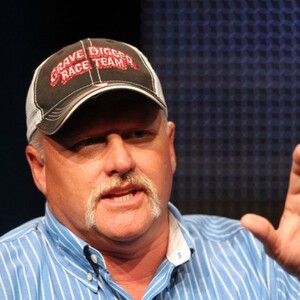