David Reutimann Net Worth: David Reutimann is an American stock car racing driver who has a net worth of $18 million. David Reutimann was born in Zephyrhills, Florida, in 1970, and started racing in dirt-track modifieds. He went on to compete in the Slim Jim All Pro Series, where he earned Rookie of the Year honors in 1997.

He made his NASCAR Nationwide Series debut in 2002 at the Hardee's 250 in Richmond. He has since competed in 127 races over the last decade, finishing in the top ten 45 times and winning the 2007 Sam's Town 250 in Memphis. His NASCAR Sprint Cup Series debut came in 2005 at the UAW-GM Quality 500 in Charlotte. He has raced 235 times in the last eight years, winning his first race at the 2009 Coca-Cola 600 in Charlotte. He has won one other race in his Sprint Cup career: 2010's LifeLock.com 400 in Chicago. He has finished in the top ten 26 times to date. Reutimann, who also won the 2004 Craftsman Truck Series Rookie of the Year award, drives the number 35 car for Front Row Motorsports. His best Sprint Cup finish came in 2009 when he ended the year at 16th. He finished 2013 sitting in the 33rd position. Reutimann and his wife, Lisa, have one daughter together, and live in North Carolina. 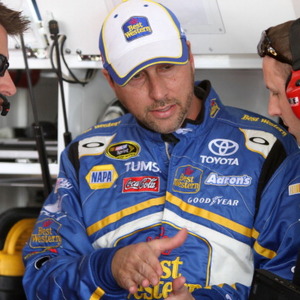