David Gilliland Net Worth: David Gilliland is an American stock car racing driver who has a net worth of $22 million. David Gilliland was born in Riverside, California, in 1976 to former driver Butch Gilliland. Gilliland was involved with racing from a young age before making his NASCAR Nationwide Series debut at the 2005 Bashas' Supermarkets 2000 in Phoenix.

He has appeared in more than 50 races in the series in the last six years, and recorded his first and, to date, only win at the 2006 Meijer 300 in Kentucky. He has finished in the top ten three times. Gilliland also races in the NASCAR Sprint Cup Series, competing in close to 300 races in the last nine years. He made his debut at the 2006 Dodge/Save Mart 350 in Sonoma, and has yet to win a single race in the series, though he has finished in the top ten eight different times. Gilliland finished 2013 in 26th place in the Sprint Cup Series. He drives car number 38 for Front Row Motorsports. Gilliland has also appeared in NASCAR's Camping World Truck Series three times, most recently in 2009 at the WinStar World Casino 350K in Texas. He has had one top ten finish. Gilliland has two children with his wife, Michelle. 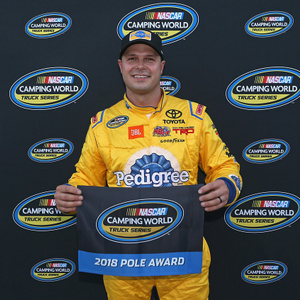