Dani Pedrosa was born in Sabadell, Spain in September 1985. He started riding bikes at four years old and had his first real racing experience at the age of nine. Pedrosa retired at the end of the 2018 season. He was the youngest world champion in 250 cc Grands Prix during the 2004 season. Pedrosa was a 125 cc world champion in 2003. In 2019 the Curva Dry Sac at the Jerez racetrack in Spain was renamed in his honor to the Pedrosa Corner. Dani Pedrosa raced in 12 consecutive championship seasons from 2006 to 2017 and was a championship runner-up in 2007, 2010, and 2012. He rode for Repsol Honda for 13 seasons until his retirement. Pedrosa signed with the KTM MotoGP team in 2019 as a development test rider. He sustained numerous injuries during his career. 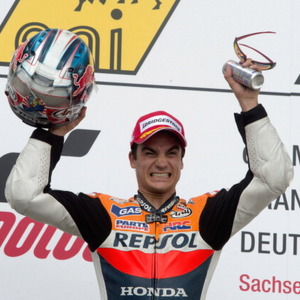