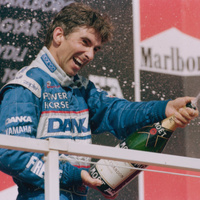 Damon Hill Net Worth: Damon Hill is a retired British racing driver who has a net worth of $30 million. Born Damon Graham Devereux Hill on September 17, 1960, in Hampstead, London, he is best known for being the F1 World Champion of 1996. The son of Graham Hill, two-time Formula One World Champion, Damon has obviously followed in his father's footsteps. What's more, he is the only son of a world champion to win the title. Damon made his racing beginnings in 1981 when he competed primarily on motorbikes. Next, Damon switched to single-seater racing cars and progressed constantly up the ranks, reaching the International Formula 3000 championship by 1989. What's interesting for this period of Hill's career is that he never won a single race, even though having great potential. It was in 1992 that he started to serve as a test driver for the Formula One title-winning Williams team, whereas the following year, he got promoted to the Williams race team. By the mid-1990s, Hill became Michael Schumacher's main rival for the Formula One Drivers' Championship. The two stiff competitors clashed on and off the track with Hill becoming F1 World Champion in 1996 and Williams earning the title the next season. Damon Hill officially retired from the sport in the 1999 season, and he has since set up several businesses and has made appearances playing the guitar with numerous celebrity bands. Apart from the above, Hill was the one to take over the presidency for the British Racing Drivers' Club from Jackie Stewart in 2006. He left the position in 2011, when he was succeeded by Derek Warwick.