What is Dale Jarrett's Net Worth?

Dale Jarrett is a former American race car driver who has a net worth of $35 million. Jarrett won the Daytona 500 in 1993, 1996, and 2000, and in 1999, he won the NASCAR Winston Cup Series championship. He competed in 329 races spanning 20 years in the Nationwide Series, finishing in the top 10 173 times and earning 11 wins. Dale raced in 668 races in nearly 25 years in the Sprint Cup Series with 260 top ten finishes and 32 wins, and he won the Brickyard 400 (twice), the Budweiser Shootout (three times), the Coca-Cola 600, and the Winston 500. After he retired from racing in 2008, Jarrett became ESPN's lead racing analyst, and in 2015, he joined the NBC Sports Broadcasting Crew as a pre-race and post-race analyst for NASCAR events. He appeared as himself in the 2005 film "Herbie Fully Loaded," and he was featured in the documentaries "The 600: History of NASCAR's Toughest Race" (2014) and "Southern Speed: The Legend of Darlington" (2016). Dale is considered among the greatest drivers in NASCAR and was inducted into the NASCAR Hall of Fame in 2014.

Dale Jarrett was born Dale Arnold Jarrett on November 26, 1956, in Conover, North Carolina. He grew up with mother Martha, father Ned, older brother Glenn, and younger sister Patti. Dale's father is a former race car driver who competed in the NASCAR Grand National Division from the early 1950s to mid-1960s and won series championships in 1961 and 1965. During his youth, Jarrett traveled across the Southern U.S. to watch his father's races, and he began playing golf at age 12. He attended Newton-Conover High School, where he played basketball, baseball, and football and helped the golf team make it to three conference championships. During his senior year, Dale was named Newton-Conover High's athlete of the year. Though the University of South Carolina offered Jarrett a full golf scholarship, he declined it and decided to pursue a career in racing. After he graduated from high school in 1975, Dale worked for his father at Hickory Motor Speedway.

Jarrett's first professional race took place at Hickory Motor Speedway in April 1977. He competed in the Limited Sportsman Division and drove a 1968 Chevrolet Nova built by Jimmy Newsome and Andy Petree. Dale finished ninth in his first race and spent the next two years competing in the Limited Sportsman Division. He then moved up to the Dash Series, followed by the Late Model Sportsman Division, coming in sixth place in the 1982 NASCAR Budweiser Late Model Sportsman Series. He was sponsored by Valvoline, Econo Lodge, and Budweiser in the 1984 Busch Grand National Series and finished fourth in the point standings. That year Jarrett also competed in the Winston Cup Series, and in 1986, he raced in the Busch Grand National Series and earned his first career victory behind the wheel of the Nationwise Auto Parts Pontiac at North Carolina's Orange County Speedway. His next career victory took place in the 1987 Busch Grand National Series, and during the 1990 and 1991 seasons, he was victorious in the Busch Series at Charlotte, Bristol, Rockingham, and Darlington. In 1990, Dale began driving a Ford Thunderbird (sponsored by Citgo) for Wood Brothers Racing and finished in the top 10 numerous times, and in 1991, he won his first Winston Cup race. In 1992, Jarrett left Wood Brothers Racing for the Joe Gibbs Racing team and drove a Chevrolet sponsored by Interstate Batteries. He finished in the top five twice, and he won the Daytona 500 in 1993 and the Mello Yello 500 in 1994. 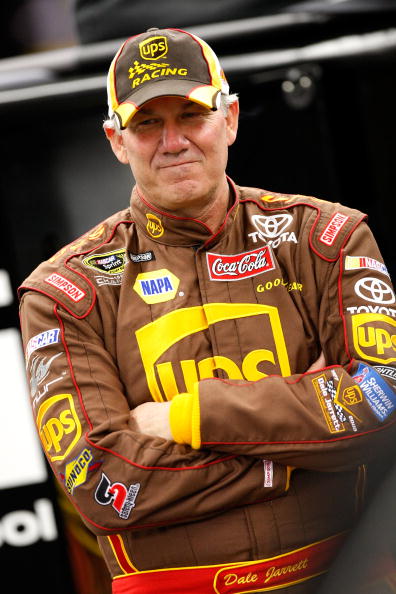 In 1995, Dale began driving a Texaco-sponsored Ford for Robert Yates and racked up four Busch Series wins. In 1996, he won the Daytona 500, Brickyard 400, and Coca-Cola 600, and he won seven races (his career best) in 1997. Jarrett won the Pontiac Excitement 400 and the Winston Cup in 1999, then he retired from the Busch Series and became a part-time owner of a Busch Series team that included his son Jason, Steve Grissom, and Kenny Irwin, Jr. Dale won the Daytona 500 again in 2000, and UPS became his primary sponsor and began a promotional campaign that featured the company attempting to convince Jarrett to drive a UPS truck in one of his races. In 2001, he crashed during a race at Kansas Speedway and suffered a concussion. Dale crashed again in 2005, and later that year, he earned his final career Cup series win at Alabama's Talladega Superspeedway. In 2006, Jarrett finished in the top 10 four times, and after the season ended, he left Robert Yates for Michael Waltrip Racing's new Toyota team. He retired from points racing in 2008 after the Food City 500, and on May 17, 2008, he competed in the All-Star race, which was his final race. After retiring, Dale became a booth announcer for ESPN's NASCAR coverage.

Dale married his longtime girlfriend, Kelley, on June 22, 1984, and they welcomed sons Jason and Zach and daughters Natalee and Karsyn before divorcing. Jason is a former race car driver, and Zach is a professional baseball player. Jarrett's former crew chief, Jimmy Makar, is married to Dale's sister, Patti, and Jarrett's first cousin is Todd Jarrett, a USPSA/IPSC Champion Handgun Shooter. Former NFL quarterback Brett Favre was a part-owner of Dale's Busch Series team, and the two co-owned the Dale Jarrett Racing Adventure in Las Vegas. An avid golfer, Jarrett once appeared in a commercial for Doral Golf Resort & Spa with Michael Jordan, Phil Mickelson, and Wayne Gretzky. In 2007, Dale and Pro Football Hall of Fame quarterback/sports broadcaster Terry Bradshaw launched the fantasy sports website Pay the Fan, which focused on football and racing.

Jarrett was named Richard Petty Driver of the Year in 1997 and 1999, and he won the award for Best Driver at the 2000 ESPY Awards. "Motorsport" magazine named him one of NASCAR's 50 Greatest Drivers in 1998, and he was inducted into the NASCAR Hall of Fame in 2014, three years after his father's induction. Dale and Ned were the third father-son duo to be inducted into the NASCAR Hall of Fame; they were preceded by Bill France Sr. and Bill France Jr. and Lee and Richard Petty. 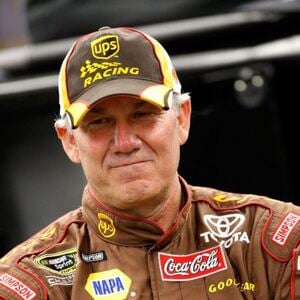