He became a top-ranked junior motocross racer and won many races. At 14 years old he stopped competing but two years later he started road racing. He went undefeated as amateur and won titles and became sponsored by South West Motorsports. Edwards turned professional in 1992. Edwards has won the Superbike World Champion in 2000 and 2002 for Honda, as well as finishing 2nd in 1999 and 2001. He turned from Superbike to MotoGP World Championship racing in 2003 and has been with Honda, Yamaha, Suter, FTR Kawasaki, and Forward Yamaha. He currently rides for the NGM Mobile Forward Racing team. He won the 1996 Suzuki 8 Hours endurance race and won again in 2001 and 2002. He has represented the United States in the Michelin Race of Champions Nation's Cup twice, winning in 2002. He owns The Colin Edwards Texas Tornado Boot Camp in Lake Conroe. 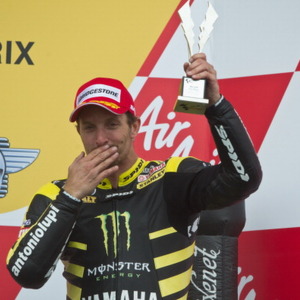