Christian Horner was born on November 16, 1973 in Leamington Spa, United Kingdom. He has two brothers, Jamie and Guy. He attended Arnold Lodge School in Leamington and later the Warwick school. The 'unofficial' fan club 'The Christian Horner Fan Club' is more commonly known as The Hornettes. Horner won a Formula Renault scholarship in 1991. He competed in the 1992 British Formula Renault Championship with Manor Motorsport and finished that season as a winner and the highest placed rookie. He then moved up to British Formula Three, and made his debut in 1994 with the Fortec team. In 1995 he moved to the ADR team, and moved again in 1996 to the TOM'S team. In addition that same year he also raced in British Formula Two. When Red Bull Racing team brought Horner to Formula One in 2005, he was the youngest of the team principals at the time. The team's success has continued to grow under the direction of Horner. In 2011, the team won their second Constructors' Championship, where Sebastian Vettel became the world's youngest double-champion. In 2012 the team won a third Constructors' Championship. In 2013 the team won its fourth consecutive F1 Constructors' Championship.

Christian Horner has a daughter with former partner Beverly Allen. Six months after his daughter was born he began dating Geri Halliwell of the Spice Girls. They became engaged in 2014 and were married in 2015. Their first son was born in 2017. 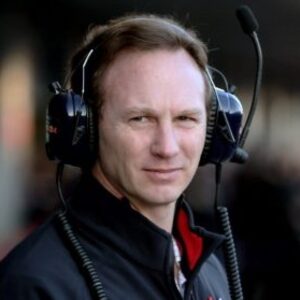