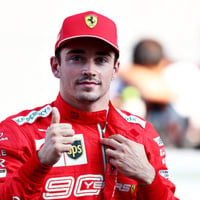 Charles Leclerc net worth: Charles Leclerc is a Monegasque racing driver who has a net worth of $12 million. Charles Leclerc was born in Monte Carlo, Monaco in October 1997. He started his karting career in 2005 and won the French PACA Championship in 2005 and again in 2006 and 2008. In 2018 he made his Formula One debut for Sauber. In 2019 Leclerc competed for Ferrari in the #16 car. He won the 2019 Belgian Grand Prix and the 2019 Italian Grand Prix and finished in 13th position in 2018. Charles Leclerc began competing in the FIA Formula 2 Championship in 2017. He was a test driver for Formula One in 2016 and 2017. Leclerc won the GP3 Series for ART Grand Prix in 2016 and the FIA Formula 2 Championship for Prema Racing in 2017. He was a friend of the late Jules Bianchi and the two were like family with Bianchi being Leclerc's godfather.