Chad Knaus Net Worth and salary: Chad Knaus is an American NASCAR crew chief who has a net worth of $5 million. Chad Knaus was born in Rockford, Illinois in August 1971. Knaus is currently the crew chief for Hendrick Motorsports' #48 Sprint Cup Series car which is driven by Jimmie Johnson.

Knaus has 61 victories as the crew chief for Johnson. He is also the only NASCAR crew chief to win five championships consecutively. Knaus started working in NASCAR in 1991 and has worked for Dale Earnhardt Incorporated, Melling Racing, Tyler Jet Motorsports, and now Hendrick Motorsports. He grew up around racetracks in the Midwest and helped his father John race against legends such as Mark Martin, Rusty Wallace, and Dick Trickle. At just 14 years old Chad was crew chief of his father's Rockford Speedway championship season. The duo also won the Great Northern Series championships and finished 2nd at the NASCAR Winston Racing Series. He has also worked as a commentator for NASCAR Performance on Speed. Knaus has voiced the crew chief in various NASCAR games. In November 2014 he was called to the NASCAR hauler after the Sprint Cup Series season finale for disobeying a NASCAR directive. 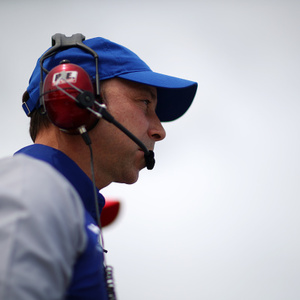