How much is Casey Stoner Worth?

Casey Stoner net worth: Casey Stoner is an Australian professional motorcycle racer and has a net worth of $14 million. Casey Stoner was born on October 16, 1985 in Australia. He competed in his first race was when he was four years old. At the age of nine and the age of fourteen, Stoner won 41 dirt and long track titles and 70 state titles. From 2000 to 2002, he contested the national 125cc GP championships in Britain and Spain, winning the English 125cc Aprilia Championship in 2000, before moving fulltime to the 250cc GP World Championships in 2002. In 2003 he moved to the 125cc GP category. In 2005 he rejoined the 250cc world championship class, racing once again for Lucio Cecchinello' team on an Aprilia. In 2006, he was in advanced negotiations with Yamaha, but after they dropped him he settled on an alliance once more with team manager Lucio Cecchinello on a Honda RC211V, on a one-bike team new to the series for the 2006 Season, Team LCR. He secured a ride with the factory Ducati team for the 2007 season, joining Loris Capirossi on the new 800cc Ducati Desmosedici GP7. 6 poles and 10 race wins took him to his first GP title, by a margin of 125 points over Dani Pedrosa, which he built during the second half of the season. He opened the 2008 season with a victory at Qatar, before a run of two races without a podium. He remained with Ducati for the 2009 season with new team mate Nicky Hayden, with a further option for a 4th season in 2010. He qualified on pole for the season opener in Qatar, and was leading the race when he crashed out. In 2011 he joined Honda Racing Corporation after four years at Ducati Corse. 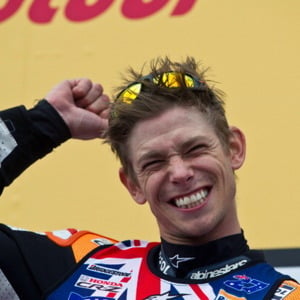