Brad Keselowski has earned his net worth through his years as a professional race car driver. He began his racing career as the driver of car #29 for K-Automotive Racing Team, which was owned by Bob Keselowski, (father) Kay Keselowski, (mother) and older brother Brian Keselowski, and finished in 33rd place for the 2004 Craftsman Truck Series Season. Since then Keselowski has driven for Hendrick Motorsports, Phoenix Racing, and Penske. He has driven 106 races in the NASCAR Sprint Cup Series, 180 races in the NASCAR Nationwide Series and 52 races in the NASCAR Camping World Truck Series. In 2007 Dale Earnhardt Jr. asked Keselowski to drive his #88 Chevy for JR Motorsports in the Busch Series. He made his first win at Nashville Superspeedway in 2008, driving for JR Motorsports and his second win was at Bristol Motor Speedway in that same year. In 2010 he began driving for Penske Racing in the NASCAR Sprint Cup and Nationwide Series. In 2011, he won the 2011 STP 400 at Kansas Speedway, after battling for first place with Dale Earnhardt Jr. This year Keselowski is not only driving for Penske, but for his own team as well, Brad Keselowski Racing. Brad Keselowski was born in Rochester Hills, Michigan in 1984 to Bob and Kay Keselowski. Brad has an older brother named Brian. Race car driving runs in the family, his father and Uncle Ron are retired drivers and his brother Brian is currently drives for K-Automotive Motorsports.

Career Earnings: Between June 2018 and June 2019, Brad earned a bit over $10 million. The vast majority of that, roughly $9 million, came from salary/winnings. That was enough to make him one of the 10 highest-earning drivers in NASCAR. 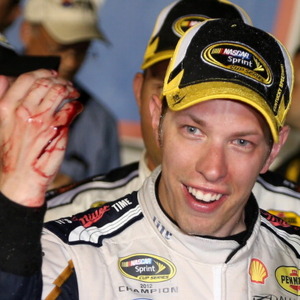