Austin Dillon net worth: Austin Dillon is an American professional stock car racing driver who has a net worth of $12 million. Austin Dillon was born in Lewisville, North Carolina in April 1990. He is from a prominent racing family including his father Mike Dillon, brother Ty Dillon, and grandfather Richard Childress.

Austin Dillon drives the #3 Chevrolet Camaro ZL1 representing Richard Childress Racing as part of the Monster Energy NASCAR Cup Series. He is also a part time driver with the #3 Chevrolet Camaro ZL1 for Richard Childress Racing in the NASCAR Xfinity Series. Dillon was named the NASCAR Rookie of the Year in 2010 in the Truck Series. He then won the NASCAR Camping World Truck Series championship in 2011. He also won the Nationwide Series Rookie of the Year in 2012 and the NASCAR Nationwide Series championship in 2013. He set the record for the most consecutive poles in the Nationwide Series at four. In 2018 Dillon won the Daytona 500 in overtime. He was also the 2014 Daytona 500 pole winner and the 2017 Coca-Cola 600 winner. As a child he played in the 2002 Little League World Series. Austin Dillon married former NFL cheerleader Whitney Ward in 2017. 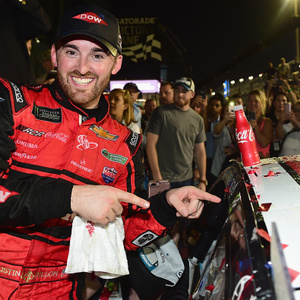