A. J. Allmendinger Net Worth

He recorded his first win at the 2013 Johnsonville Sausage 200, which he followed up with a victory at the 2013 Nationwide Children's Hospital 200 in Ohio. He has two wins and two top ten finishes in ten races in the series. Allmendinger's first race in the NASCAR Sprint Cup Series came at the 2007 Food City 500 in Bristol. He didn't record his first win until the 2014 Cheez-It 355 at The Glen in Watkins Glen; as of the fall of 2014, it remains Allmendinger's first and only victory in the Sprint Cup Series, though he has 34 top ten finishes. Allmendinger is a two-time IFK champion who has won the 2002 Barber Dodge Pro Series, the 2003 Champ Car Atlantic, and the 2012 Rolex 24 at Daytona. He was awarded the 2004 Champ Car World Series Rookie of the Year award; Allmendinger has participated in 40 Champ Car races with five wins and 14 podium appearances. He also participates in the IndyCar Series, having appeared in six races with his first coming at the 2013 Indy Grand Prix of Alabama in Birmingham. 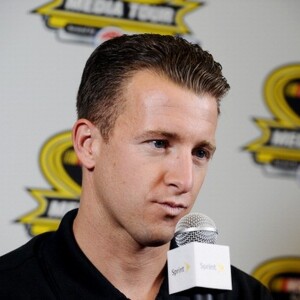