Alex Zanardi Net Worth: Alex Zanardi is an Italian racing driver and paracyclist who has a net worth of $5 million. Alex Zanardi was born in Bologna, Italy in October 1966. Zanardi won two CART championship titles in the late 1990s in North America. He was also a Formula One driver but was not as successful.

In 2011 he was involved in a serious crash that resulted in the amputation of both of his legs. Less than two years later Zanardi returned to racing and competed in the FIA World Touring Car Championship driving for BMW Team Italy-Spain from 2003 to 2009. Zanardi made the transition to handcycling and he won his first senior international medal in 2011 winning a silver at the UCI World Road Para-Cycling Championships. He won gold medals at the London Paralympics in 2012. The same year he was included by International Paralympic Committee into the London 2012: Top 12 performances list. The Alex Zanardi Edition Acura NSX was introduced in 1999 to the U.S. market. He has won the Italian Superturismo, CART FedEx Championship Series, and European F3 Cup. 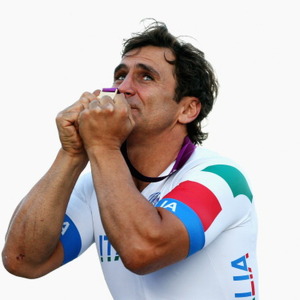