Alain Prost Net Worth: Alain Prost is a French race car driver who has a net worth of $100 million. Alain Pascal prost was born in Lorette, Loire, France in February 1955. Prost is a four time Formula One Driver's Champion. His 51 held the record for most Grand Prix victories from 1987 to 2001.

Alain was awarded the World Sports Awards of the Century for the motor sport category in 1999. At 14 Alain discovered karting. He competed in junior ranks and won the French and European Formula Three championships. In 1980 at 24 he joined the McLaren Formula One racing team. A year later he won his first race at the Grand Prix in France for the Renault team. He was known for a fierce rivalry with driver Ayrton Senna which included controversial clashes. Prost was fired from Ferrari after criticizing his team in public. He took 1992 off but joined the Williams team in 1993. He won the 1993 championship and then retired from Formula One. He took over the French Liger team in 1997 and ran it as Prost Grand Prix until 2002 when it went bankrupt. He now competes in the Andros Trophy, and ice racing championship. He completed the Absa Cape Epic race in 2012 and 2013. Alain is married to Anne-Marie and the couple has two songs together. He was awarded the Legion d'Honneur by President Francois Mitterrand. 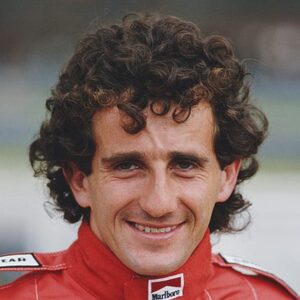