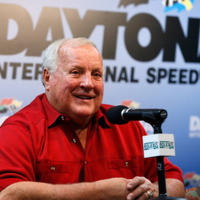 AJ Foyt net worth: AJ Foyt is a retired American race car driver who has a net worth of $35 million dollars. Born in Houston, Texas, AJ Foyt, also known as Anthony Joseph Foyt, Jr., dropped out of high school to become a mechanic. He began racing midget cars in the mid-50s, and won his first race in 1957. He went on to win 20 midget car races. He began racing Sprint and Championship cars in 1958. Over the course of the next 36 years, he would win a massive number of races, and between 1960 and 1979, he finished atop the leader board for the USAC and Cart Championship Series. He was also a USAC Silver Crown Series Champion, a Gold Crown Champion, a Stock Car Champion, and an IROC Champion. He also had seven wins and 36 Top Tens racing in the NASCAR Sprint Cup Series. He is the only driver to ever win the Indianapolis 500, the 24 Hours of Le Mans, the 24 Hours of Daytona, and the Daytona 500.