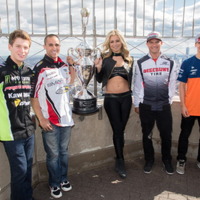 Adam Cianciarulo net worth: Adam Cianciarulo is an American professional motocross racer who has a net worth of $2 million. Adam Cianciarulo was born in Port Orange, Florida in October 1996. Cianciarulo competes in supercross. He currently rides the #46 Kawasaki KX250F and races in the 250cc class for Monster Energy Kawasaki. He became the highest winning mini bike rider in AMA Amateur Motocross National Championships in 2012. During that time Adam won 11 championships. In 2014 he underwent shoulder surgery and had to miss the rest of the season after dislocating his shoulder in the Toronto Supercross. He missed a most of the first half of his rookie season with an illness.