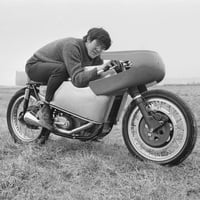 Peter Williams net worth: Peter Williams is a retired English motorcycle road racer who has a net worth of $8 Million. Peter Williams was born on September 29, 1945 in Nottingham, England. Williams trained in mechanical engineering, and is best known for introducing a number of modern developments to bikes, including alloy wheels and disk brakes. He began racing in 1964, racing on UK short-circuits, including the Isle of Man Manx Grand Prix in 1964 and the Dunstall Norton Dominator 500cc in 1965. His first TT race was in 1966, and he won the North West 200 500cc race that same year. His greatest Grand Prix season came in 1967, when he finished in fourth place in the 500cc world championship. Both of those races were ridden with a Matchless motorcycle. Peter Williams worked often with his sponsor Tom Arter, and in 1969 the two developed a prototype Weslake twin cylinder 500cc engine. The project failed, but it laid the groundwork for Williams' engineering future. Williams won his only world championship race in 1971, in the 350cc Ulster Grand Prix. His final year of racing was 1973, a year which saw him win the Isle of Man F750 TT on a John Player Norton Special. After his racing days, Peter Williams began giving lectures at universities, discussing advances in technology and ways to drive more safely and efficiently. In 2013, he formed Peter Williams Motorcycles to recreate several of his Norton Monocoque bikes, the same one he used to win the Isle of Man F750 TT in 1973. He previously operated a Kawasaki motorcycle dealership in the 1970s in Southampton and also owns several patents.