Yohan Blake net worth: Yohan Blake is a Jamaican Olympic runner who has a net worth of $5 million. Born in St. James, Jamaica, Yohan Blake was originally interested in playing cricket, but shifted his focus to sprinting at the urging of a school instructor. He was immediately successful in track and field, setting a Jamaican junior record during his 100-meter race at the 2007 CARIFTA Games. By 2009, he had established himself as a formidable runner at the senior level, becoming the youngest competitor to ever break the 10-second 100m barrier. He was banned from competition for three months, when the stimulant 4-Methyl-2-hexanamine was found in his system, and returned to competition at the 2011 World Championships. He breezed through the competition, and became the youngest 100m runner to ever win Gold at the World Championships. He also helped the Jamaican relay team to another Gold and a new world record. At the 2012 Olympic Games, he won Silver Medals in the 100m and 200m races, and Gold as part of the Jamaican 4×100 relay team. See also: Usain Bolt Net Worth 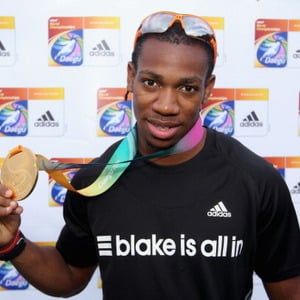