What is Usain Bolt's net worth and salary?

Usain Bolt is a Jamaican sprinter who has a net worth of $90 million. At his peak, Usain Bolt was the fastest human on the planet and one of the highest-paid athletes in the world, especially during Olympics years. Usain earned $20-30 million per year in the years leading up to the Olympics. He is, by far, the highest-paid track and field athlete of all time. As you might assume, the vast majority of his earnings came from endorsements rather than on-track competition prizes. His biggest paycheck came from the German shoe company Puma which paid Usain $9 million a year to wear their shoes at all times, on and off the track. Usain brought home additional millions from deals with Visa, Nissan and Gatorade. In 2010, Bolt released a best selling autobiography that came with a multi-million dollar advance from publisher Harper Collins. Usain also commands appearance fees ranging from $250,000 to as much as $500,000 to compete at track and field events throughout the world. During his Olympic career Usain won eight gold medals. He holds a number of world records including the 100 meter (9.58 seconds) and 200 meter (19.19).

Usain St. Leo Bolt was born on August 21, 1986 to parents Wellesley and Jennifer. He was born in Sherwood Content, a small town in Trelawny Parish, Jamaica. He has two siblings, a brother Sadiki and a sister Sherine, with whom he would spend his childhood days playing cricket and football in the street. His parents ran a local grocery store in the rural town. Usain went to Waldensia Primary school and by the age of twelve he had already become the school's fastest runner. He focused on other sports when he first attended William Knibb Memorial High School, but the cricket coach noticed his fast running speed and encouraged him to try for track and field. Dwayne Jarrett and Pablo McNeil, a former Olympic sprinter, coached Bolt throughout high school, and Bolt began winning medals in championship high school games.

In 2001, Bolt made his first appearance on the world stage at the IAAF World Youth Championships in Hungary. He didn't qualify for the finals but he set a new personal best of 21.73 seconds in the 200 m event. Bolt went on to the CARIFTA games where he set championship records in the 200m and 400m races. He participated in the Central American and Caribbean Junior Championships where he continued to set records and personal bests. Usain is one of only 9 other athletes to win world championships at the youth, junior, and senior levels of an event. For his performance, the Prime Minister of Jamaica arranged for Bolt to move to Kingston to begin training with the Jamaica Amateur Athletic Association.

At the age of 15, Bolt became the youngest world-junior gold medalist ever when he won the 200 meter race at the 2002 World Junior Championships in Kingston, Jamaica. He also participated in the Jamaican sprint relay team and took home two silver medals. He went on to win four gold medals at the 2003 CARIFTA Games, and won another gold medal and set another world record at the 2003 World Youth Championships. His senior year of high school Bolt broke his own records at his last Jamaican High School Championships. By then, Usain was becoming more well-known and popular around his hometown and all of Jamaica. Bolt continued to compete and break records but decided to then turn his focus to nabbing a spot on the Jamaican Olympic Team. 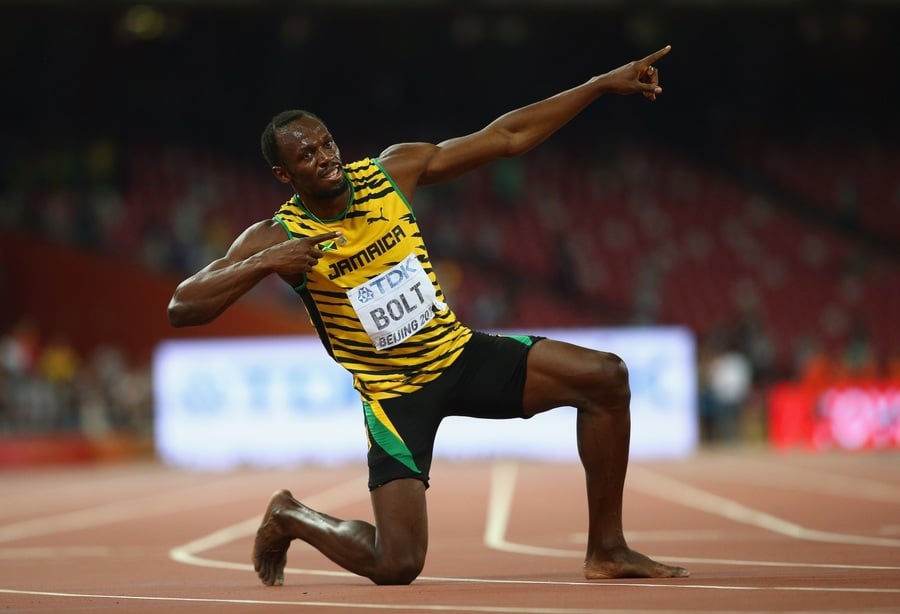 With the help of his new coach, Fitz Coleman, Bolt became a professional runner in 2004 and began his new career at the CARIFTA Games in Bermuda, where he continued to smash records and was awarded the Austin Sealy Trophy for most outstanding athlete at the Games. Despite a hamstring injury, Bolt was chosen in May 2004 for the Jamaican Olympic Squad. Bolt headed to his first-ever Olympics in Athens but the hamstring injury came back to haunt him and he was eliminated in the first round of the 200 meters. American colleges began to offer Bolt scholarships to train in the U.S. while continuing to represent his home country, but Bolt refused them out of loyalty for Jamaica. He went on to study, train, and compete at the University of Technology of Jamaica. Bolt continued to race, medal, and set records until his next Olympics.

Usain Bolt won three gold medals at the 2008 Beijing Olympics. He won five gold medals and two silver medals at World Championship competitions after the Beijing Olympics. Amazingly, Usain Bolt's net worth continued to explode even more thanks to his performance at the 2012 London Olympics. He defended his Beijing title and won the 100 meter gold medal with an astonishing time of 9.63 seconds, beating his own Olympic record. By the time, Bolt was already considered to many around the world to be the greatest sprinter of all time. His gold medal victory in London came hours before Jamaica celebrated the 50th anniversary of its independence from the United Kingdom. Bolt became popular during the London Olympics for his dramatic and often humorous mannerisms at the finish line. He coined the "lightning bolt" pose, consisting of extending a raised left arm to the side with the right arm folded across the chest, and it caught on quickly around the world (even President Obama partook in the stance).

He won gold medals in the 100 meters, 200 meters, and 4 x 100 m relay at both the 2012 Olympic Games in London and the 2016 Olympic Games in Rio de Janeiro. Bolt retired from competition in 2017 after his performance slipped at the World Championships. Bolt often discussed wanting to pursue a football career after his retirement from running, and even got a few serious offers from major clubs around the world, but announced in January 2019 that he was retiring from sports altogether.

Insiders describe Bolt's personality as relaxed, laid-back, and fun-loving. The eight-time gold medalist announced in January 2020 that he was expecting his first child with girlfriend Kasi Bennett. They have been together since 2016. Bolt is a fan of reggae music and the Call of Duty video game series. He started working as a dancehall music producer in July 2019. He has revealed that he suffered from scoliosis as a child. 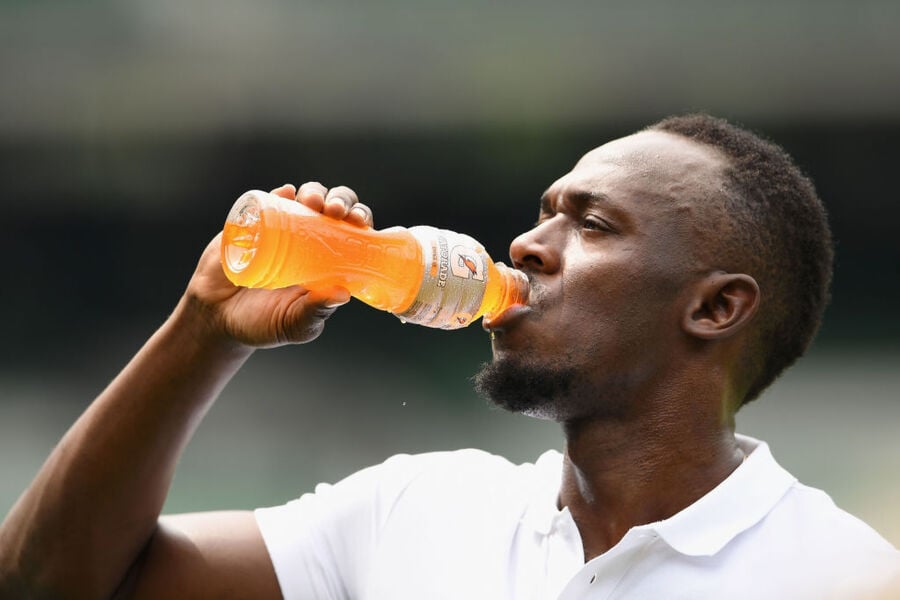 Endorsements and Other Income

At his peak, Usain Bolt was one of the highest-paid athletes in the world. He typically earned around $20 million per year, most of which came from endorsements. Usain has endorsement deals with brands like Gatorade, Nissan, Visa, Hublot, Virgin Media and Puma. Out of $20 million in earnings, $9 million comes from Puma alone for him to wear their brand of shoes. Bolt also makes money through appearance fees and prize money. He charges $250-300,000 for a track meet appearance. At the 2010 Penn Relay, nearly 55,000 fans came out to watch Usain run, smashing previous track and field attendance records. Between June 2017 and June 2018, Usain Bolt earned $31 million. Only $1 million of his income was from on-track earnings. The rest came from endorsements.

Perhaps not surprisingly for someone who loves to go fast, Usain owns a very impressive car collection. He owns a number of Ferraris including an F430, 458 and a California. He owns a BMW M3 and previously totaled a BMW back in 2009. He owns a highly customized Jeep Wrangler, an Audi SUV, several Nissan GT-Rs and a Chevy Camaro.

Usain is a co-founder in a Miami-based electric vehicle company called Bolt Mobility. The company operates 5,000 scooters in several US cities and Paris, France. In May 2019, Bolt launched a two-seater electric car called the B-Nano that will eventually have a starting price of just $999. In March 2020, the company raised $30 million in venture capital funding.