Tyson Gay Net Worth: Tyson Gay is an American sprinter who has a net worth of $12 million. Born in Lexington, Kentucky, in 1982, Tyson Gay was born into an athletic family: His grandmother ran in college, his mother sprinted as a child, and his older sister is also an accomplished runner. The two often challenged each other growing up. Gay attended the University of Arkansas, where he studied sociology and marketing, and was a member of the track and field team. He brought the school its first NCAA 100m champion and shattered school records; Arkansas went on to win the NCAA national championship anchored by Gay. Gay made his professional debut at the USA Outdoor Championships, finishing second, and he was chosen to represent at the 2005 World Championships in Athletics, where he placed fourth. Gay continued to tear up the international circuit leading up to the 2008 Olympics in Beijing, where he was expected to take on the fastest man in the world Usain Bolt. Disappointing performances kept Gay from qualifying for finals rounds and he left Beijing without a medal. Four years later, he lost to Bolt in the 100m final, but won his first Olympic medical in a relay event. In 2013, he tested positive for a banned substance and admitted to doping. Gay was suspended until mid-2014 and was forced to give up his 2012 Olympic silver medal. He remains the U.S. record holder for the 100m sprint with a time of 9.69 seconds as of 2014, second fastest in the world behind Bolt. Gay lives in Florida and has one daughter. 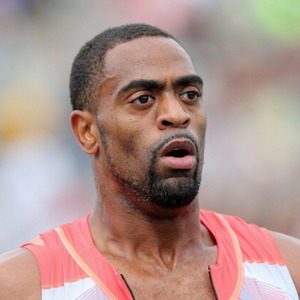