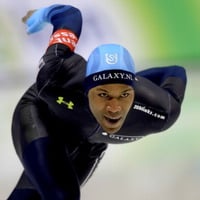 Shani Davis Net Worth: Shani Davis is an American Olympic speed skater who has a net worth of $2 million dollars. Born in Chicago, Illinois on August 13, 1982, Davis stands at six feet and two inches tall and weighs 190 pounds. A roller skater since age of two, he started winning races when he was just six years old. Davis attended Marquette Senior High School followed by Northern Michigan University. He received his first Olympic gold medals in the 2006 Turin 1000m race and the 2010 Vancouver 1000m race, as well as he earned Silver Medals for the 1500m races in Turin and then again in Vancouver. In the meantime, he received a Gold Medal in the 2005 Moscow World Allround Championship, as well as the 2006 Calgary Championship. Actually, he is the first black athlete to win a gold medal in the Olympics and has dozens of individual wins via the ISU Speed Skating World Cup. Davis holds three current world records for speed skating. He holds the current world record for 1000 meters with a time of 1:06.42, the record for 1500 meters with a time of 1:41.04, and the record for Samalog with a time of 145.742. Recently, he competed in the 2014 Winter Olympic Games in Sochi, where he placed eighth in the 1000m race, twenty-fourth in the 500m race, and eleventh in the 1500m race. It has been said that the animated character, Frozone, from the movie The Incredibles, was inspired by Davis.