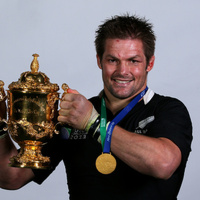 Richie McCaw net worth and salary: Richie McCaw is a New Zealand former rugby union player who has a net worth of $3 million. Richie McCaw was born in Oamaru, New Zealand in December 1980. He played at Otago Boys' High School and Lincoln University. McCaw was an openside flanker who wore #8 and his all black number was 1014. He played for Canterbury from 1999 to 2015 and scored 45 points in 34 appearances. Richie McCaw played for Crusaders from 2001 to 2015 and scored 135 points in 145 appearances. He played for the New Zealand national team from 2001 to 2015 and scored 135 points in 148 appearances. He was the captain of the national team for several matches and won two Rugby World Cups. McCaw is the most capped test rugby player of all time and won the World Rugby player of the year award three times. He is also the most capped player in rugby union history. Richie McCaw married hockey player Gemma Flynn in 2017. In 2019 he was inducted into the World Rugby Hall of Fame.