How much is Natalie Coughlin Worth?

Natalie Coughlin is an international professional swimmer whose strokes include back stroke, butterfly, freestyle and medley, and she has a net worth of $2 million. Natalie Coughlin has earned her net worth through her many swimming competitions and has competed in the (2004) Athens Summer Olympic Games, the (007) World Aquatics Championship, the (2008) Beijing Summer Olympic Games, and the (2011) U.S. Summer Nationals. She has won forty eight total career medals in international competition. Natalie Coughlin was born in Vallejo, California in 1982. She attended St. Catherine of Siena School for her primary education and Carondelet High School in concord, where she broke two international records, one for the backstroke and the other for the 200 yard IM. She earned a BA in Psychology at the University of California in Berkely and in the first three years had earned herself twelve awards Swimmer of the Year Awards from the National Collegiate Athletic Association. Natalie Coughlin has also made several television appearances on shows such as the Today Show, Iron Chef America and Dancing with the Stars, season nine. Natalie is married to Ethan Hall, a Crow Canyon Sharks swim coach and they reside in Lafayette, California. Coughlin has also appeared in a swimsuit addition of Sports Illustrated, clad only in body paint. 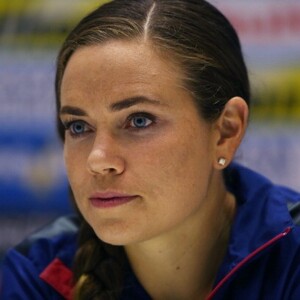