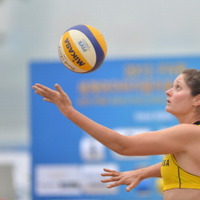 Morgan Beck net worth: Morgan Beck is an American professional beach volleyball player and model who has a net worth of $1 million dollars. Morgan Beck was born in Newport Beach, California, and went on to graduate from San Clemente High School. She began to gain national attention as an outside and middle hitter on the University of California – Berkeley volleyball team. After graduating, she turned pro, and has since played for AVP Pro, USA Volleyball, and the AVP Young Guns. In addition to her busy volleyball career, the 6'3″ athlete has also found moderate success as a model. She has appeared in ads for Nike, among other brands, and has appeared on the cover of Swoop, and in Complex Magazine. She was chosen by Complex as "One of the 25 Hottest Athletes on the 2012 U.S. Olympic Team". She married Olympic skiing star, Bode Miller in October of 2012.