She also co-holds the world record for the 4×100 meter medley relay. Franklin made her Olympic debut in 2012 at 17 years old where she won four gold medals and five total medals. She holds 27 total medals in international competition including 16 gold. Franklin won a gold medal in the 4 x 200 m freestyle relay in the 2016 Rio Olympics. She has appeared in an episode of the TV series Pretty Little Liars and in the film The Internship. 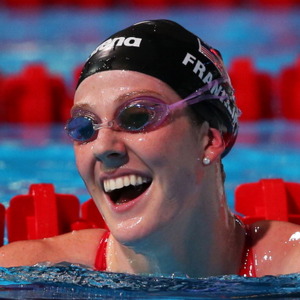