Miguel Indurain Net Worth: Miguel Indurain Larraya is a former Spanish road racing cyclist who has a net worth of $10 million. Miguel Indurain was born in Villava, Navarre, Spain, in 1964. He played a variety of sports growing up before discovering his passion for cycling. He took second place in his first amateur race and became the youngest person to win the National Amateur Road Championship at 18 years old.

Indurain made his professional debut with Reynolds in 1984 after participating in the Los Angeles Olympics earlier in the year. During his career, he won five straight Tours de France, claiming the title in 1991, 1992, 1993, 1994, and 1995. Indurain is just the fourth person in history to win five times in a row. He's also a two-time winner of the Giro d'Italia, making him the seventh person to do so. Indurain, who became famous for his impressive physiology, stood at six-feet, two-inches tall and weighed 176 pounds. His body took in oxygen at a rate nearly double that of the average person's. On New Year's Day in 1997, Indurain announced his retirement in Pamplona. He has three children with his wife, Marisa, and continues to be actively involved with cycling and the Olympics. 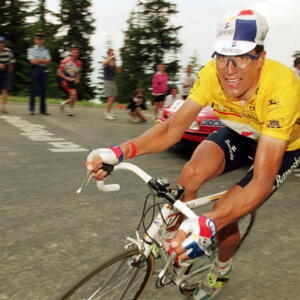