Mat Fraser net worth: Mat Fraser is a professional CrossFit athlete who has a net worth of $2.5 million. He is one of the most successful Crossfit athletes of all time. He is the first person in history to win five Crossfit games. He won the CrossFit Games in 2016, 2017, 2018, 2019 and 2020.

Mat Fraser was born in Kingston, Canada in January 1990. His parents are Canadian Olympic figure skaters Candace Jones and Don Fraser. Fraser's background is in Olympic weightlifting but he injured his back in 2009 and switched to CrossFit. He won five Regional championships in the North East region in 2014, the East region in 2015, 2016, and 2017, and the Central region in 2018.

Fraser finished in second place at the 2014 and 2015 CrossFit Games. He was the second person ever to win four consecutive CrossFit Games titles (2016 – 2019), Rich Froning Jr. was the first.

Before 2015 he did not have a strict diet and would be known to eat an entire pint of ice cream or a half of a dozen donuts. He now eats five big meals a day and has lost 10 pounds.

[The photo of Mat Fraser seen on this page is a DoD photo taken by Navy Petty Officer 1st Class Dominique A. Pineiro and licensed via creative commons.] 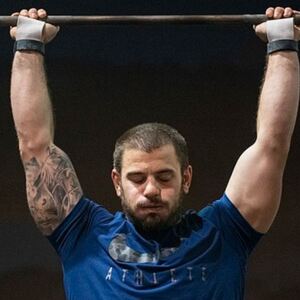