What is Mary Lou Retton's Net Worth?

Mary Lou Retton is a retired American gymnast who has a net worth of $8 million. Mary Lou Retton won the gold medal in the individual all-around competition at the 1984 Summer Olympics. After the Olympics, Retton stayed in the public eye in a variety of ways, perhaps most notably as a supporter of the Reagan administration. She also also went on to attend the University of Texas at Austin and appeared in many TV commercials.

Retton was born on January 24, 1968 in Fairmont, West Virginia. Her father, Ronnie, was in charge of a coal-industry transportation equipment business. She was born with hip dysplasia, which was made worse over time from her extensive gymnastics training. She began training gymnastics at the age of 8 after watching Nadia Comaneci win in the 1976 Summer Olympics in Montreal. In order to encourage her gymnastics training, the family moved to Houston so that Retton could train under Bela and Marta Karolyi, the couple who had coached Nadia Comaneci.

After starting to work with the Karolyis, Retton quickly became a star in gymnastics. She won the American Cup in 1983 at the age of 15. The same year, she placed second in the U.S. Nationals, finishing just after Dianne Durham. A wrist injury caused her to miss the World Gymnastics Championships but she then won the American Classic in both 1983 and 1984.

Retton went on to win the U.S. Nationals in 1984 and also qualified at the U.S. Olympic Trials. However, she then injured her knee while she had been performing a routine. While signing autographs, she felt her knee lock-up and realized the injury was serious. She was forced to get an operation on her knee five weeks prior to the 1984 Summer Olympics. The pressure was on for her to recover quickly in order to perform well in the Olympics, especially since it was being held for the first time in the United States in 52 years. However, she recovered just in time to be competitive and was able to perform. 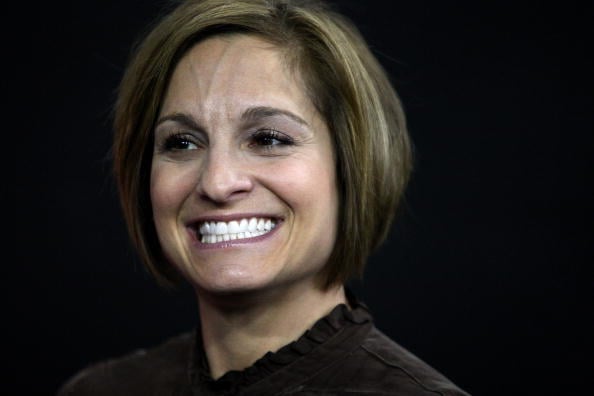 Because the entire Soviet bloc apart from Romania had decided to boycott the Olympics, eliminating much of the typical American-Soviet gymnastics competition, Retton was primarily engaged in a close battle with Romanian Ecaterina Szabo for the all-around gold medal. Retton was initially behind Szabo, who had scored higher on the uneven bars and the balance beams. Stunningly, she scored perfect scores of 10 on both the vault and in the floor exercise, giving her the needed boost to grab the win. The victory was especially dramatic considered the knee injury and speculation that it would hinder her performance. Retton won the gold by .05 points and became the first female gymnast not from Eastern Europe to win the individual all-around gold. She also was the first American woman to be an Olympic all-around champion. Retton also won two silver medals and two bronze medals at the same Olympics.

Retton continued her gymnastics career following the Olympics. She won the American Cup all-around competition in 1985 for a third time. She then decided to retire from gymnastics in 1986 at the age of 18. One of Retton's signature moves on the uneven bars became known as "The Retton Flip" and consisted of a transition that involved perching on the high bar. Over time, the move was removed from the Code of Points due to stylistic changes in gymnastics over the years. In 1997, Retton was inducted into the International Gymnastics Hall of Fame. She was the first woman to be inducted into the Houston Sports Hall of Fame in January of 2020.

Following her gymnastics career, Retton had a number of endorsement deals. She was pictured on the front of a Wheaties box and also later became a spokeswoman for the U.S. drugstore chain Revco. Retton also became an outspoken supporter of the Reagan administration, appearing in a number of television ads supporting Ronald Reagan for president. She also appeared alongside him at a rally for his reelection campaign. She remained involved in conservative politics for years afterward as well. In 2004, she delivered the Pledge of Allegiance with former fellow gymnast Kerri Strug on the second night of the Republican National Convention.

Additionally, Retton made cameo appearances as herself in a number of films and shows. She appeared in "Scrooged" and "Naked Gun 33+ 1/3: Final Insult." She also appeared in "Knots Landing," "Baywatch," and a commercial for RadioShack in 2014.

In 2018, she competed on the 27th season of "Dancing with the Stars." She was partnered with professional dancer Sasha Farber but was eliminated in the sixth week, coming in ninth place.

Following her gymnastics career, Retton attended The University of Texas at Austin. Retton lived in Houston, Texas until 2009 when she moved back to West Virginia. In 2012, she moved back to Houston and then married real estate developer Shannon Kelley, the former quarterback of the University of Texas. They had four daughters together – Shayla, McKenna, Skyla, and Emma. They divorced in 2018.