He started surfing at just nine years old and won an amateur Schoolboys contest at 13 years old. In 1984 he reached the top of the ASP ratings at just 17 years old. Occy developed a rivalry with American Tom Curren at the Op Pro event. Mark Occhilupo struggled with depression during his career but was able to stay successful at surfing. His other ASP World Tour wins came at the Rip Curl Pro in 1998, the Gotcha Tahiti Pro in 1999, the Quiksilver Pro Fiji in 1999, and the Billabong Pro in 1999. He has gone on to be a television personality for Fuel TV and competed on the reality TV series Dancing with the Stars in Australia in 2011. 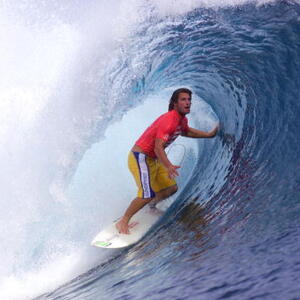