Marion Jones Net Worth: Marion Jones is an American gold medalist and former professional athlete who has a net worth of $500 thousand dollars. Born in Los Angeles, California, in 1975, Marion Jones graduated from the University of North Carolina at Chapel Hill in 1997. She eventually married one of her college track coaches, who resigned to continue the relationship.

She and her husband trained for Jones' 2000 Olympics performance in Sydney, Australia. Prior to the beginning of the Games, Jones said she would win all five gold medals in her track-and-field events. Her husband, C.J. Hunter, pulled out of his own Olympic events and it was soon announced that he failed four drug tests before the Olympics. The duo would divorce in 2002. Jones went on to win five gold medals at the Sydney Games, but confessed in 2007 that she took performance-enhancing drugs during the Olympics and she lied about the use to a grand jury as part of the BALCO investigation. She was forced to forfeit her gold medals. In 2010, Jones was signed to the Tulsa Shock of the WNBA after being drafted during the 2003 WNBA Draft by the Phoenix Mercury. Jones appeared in 47 games with the Shock, averaging 2.6 points and 1.3 rebounds per game, and was released the following year. In 2006, Jones was reported to be in dire financial straits, and her home in North Carolina near NBA star Michael Jordan's was foreclosed on. That same year, Jones was linked to a check fraud scheme and pled guilty to lying to the Department of Homeland Security. She was sentenced to six months in jail in 2008; the sentence was connected to both the use of steroids and the check fraud scheme. She remained at the Federal Medical Center in Texas from March 7th until September 5th. Jones has been married to her current husband, Obadele Thompson, since 2007. They have two children together. 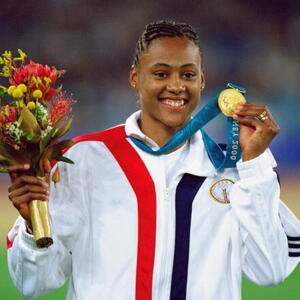