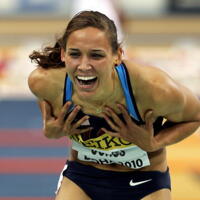 What is Lolo Jones' net worth?

Jones was born on August 5, 1982 and given the name Lori Susan Jones. She was born in Des Moines, Iowa but moved and changed schools frequently. She was primarily raised by her mother, who had to have two jobs to support the family, while her father was in prison. She began going by the name of "Lolo" in order to distinguish herself from her mother, whose name is also Lori.

Jones began running track while she was in school and eventually moved with a number of different families in order for her to attend Theodore Roosevelt High School in Des Moines. In addition to running track, she also played the cello in the school orchestra. She was heavily supported by the local community who wanted her to succeed in track and field. While in high school, she was named the Gatorade Midwest Athlete of the Year.

Following high school, Jones enrolled at Louisiana State University where she competed on LSU's track team. Jones primarily competed in hurdling events as well as relays as part of a four-woman team. In 2004, she won the 100-meter hurdles title at the NCAA Mideast Region Championships, the SEC Championships, and the Penn Relays. Her career at LSU was overall very successful as she is ranked among the top-three women for all-time in the 60-meter and 100-meter hurdles.

Jones did not qualify for the 2004 Summer Olympics in Athens, Greece. She considered giving up running but decided not to. This was a tough choice, as Jones had to devote all her time to running and was unable to pursue a career in her field of study, as she received Spanish and economics degrees. Instead, she struggled for money and had to work part-time jobs as a waitress, personal trainer, and customer service representative at Home Depot following her graduation from college.

In her first professional meet in Stuttgart, Jones finished second overall. She then had a very successful 2006 season in which she won the Heusden-Zolder in July, finished sixth in the 2006 World Athletics Final, and was ranked fourth in the United States and seventh in the world by "Track & Field News."

In 2007, Jones won her first national championship, winning in the 60-meter hurdles event at the USA Indoor Championship. She also won two meets in the European winter circuit and placed third at the 2007 USA Outdoor Track and Field Championships. This allowed her to earn a spot on the American team at the World Championships in Osaka, Japan, where she finished sixth.

In 2008, Jones was hoping to make the Olympic team for the upcoming summer Olympics. She was able to do so after performing very well at a number of international competitions and winning the 2008 USA Indoor Championships, as well as the World Indoor Championships in Valencia, Spain.

At the Beijing Olympics, Jones was favored to win the 100-meter hurdles event but clipped the ninth of ten hurdles and stumbled, causing her to come in seventh. The loss was devastating to Jones and also attributed to a spinal problem that caused a disconnect between her brain and legs, not allowing her to sense where her feet were. She had an operation to correct the problem. 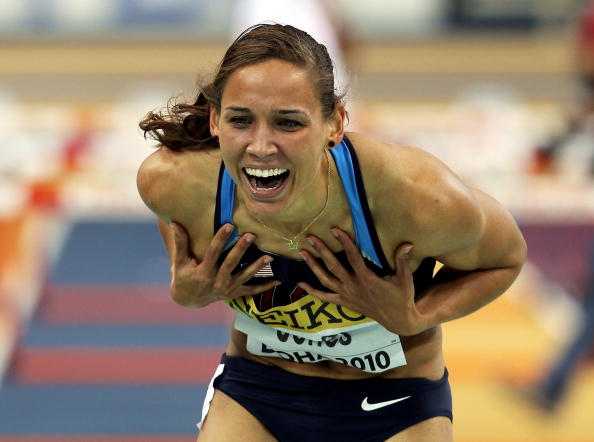 The following year, in 2009, Jones experienced more success in Europe and in the United States, though she missed the opportunity to compete at the 2009 World Championships in Berlin after colliding with another runner in the semi-finals. She also suffered from a couple of hamstring injuries that year, which ruled her out for a number of major championships.

In 2010, she set a new American record in the 60-meter hurdle event and then won several competitions throughout Europe. She missed a large part of the 2011 indoor season due to injury and illness. However, she was able to qualify for the 2012 Summer Olympics in London, though she was unable to take home a medal.

In tandem with her track and field career, Jones had also begun training in bobsledding following her 2008 Olympic experience. She was named to the 2012 U.S. women's bobsledding team and then competed in the 2014 Winter Olympics. The team failed to medal, placing eleventh.

Given her success and popularity with fans, Jones has also pursued other professional pursuits outside of athletics. In 2013, she had a role in the "Left Behind" movie series and then participated in the 19th season of "Dancing with the Stars." She appeared on "Whose Line is it Anyway" in 2016 and joined the cast of the MTV mini-series, "The Challenge: Champs vs. Pros" in 2017. In 2019, she joined the cast of "Celebrity Big Brother" and was evicted in the final episode. She also hosted the two-part reunion show for "The Challenge: War of the Worlds" and also joined the cast of the thirty-sixth season of "The Challenge" in 2020, though she left the show mid-season.

Jones is a devout Christian and has been very outspoken about her faith. She also has been honest about her efforts to remain a virgin until she is married and was candid about her dating challenges as a woman approaching 40 during the COVID-19 pandemic. She amassed a large following on social media and has retained many of her followers by remaining an active commentator on platforms like Twitter and Instagram.