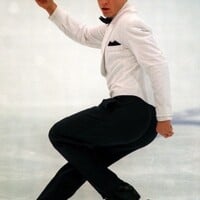 Kurt Browning net worth: Kurt Browning is a Canadian figure skater, choreographer, and commentator who has a net worth of $5 million dollars. Kurt Browning was born in Rocky Mountain House, Alberta, Canada, and grew up in Caroline, Alberta, Canada. He went on to become one of the world's most famous figure skaters. Over the course of his career, he won four World Championships and four Canadian Championships. He also competed in the Olympics for Canada in 1998, 1992, and 1994. He finished the Olympics in 8th, 5th, and 4th, respectively. In addition to his amateur titles, he also won three Canadian Professional Championships, three World Professional Championships, and was named American Skating World Professional Skater of the Year, among many other honors. In 1998, he became the first skater to land a ratified quadruple jump during a competition, when he landed a quadruple toe loop during the World Championships. Since retiring from competition, he has worked primarily as a coach, choreographer, and commentator.