What is Kerri Walsh's Net Worth?

Kerri Walsh Jennings is an Olympic gold medalist who has a net worth of $6 million dollars. Walsh is known for winning considerable achievements along with her longtime teammate, Misty May-Treanor. Together, they earned gold medals in beach volleyball at three separate Summer Olympics from 2004 to 2012.

Kerri Lee Walsh Jennings was born on August 15th of 1978 in Santa Clara, California. Initially raised in Scotts Valley, Kerri relocated to San Jose before beginning high school. While attending high school in San Jose, Walsh proved her athletic talents on the volleyball and basketball teams. She led these teams to state championships in four separate years (three for volleyball, one for basketball). In 1996, she won the Gatorade National High School Volleyball Player of the Year Award. During these early years, she competed against her future doubles partner, Misty May-Treanor.

After graduating from high school, Walsh was given a volleyball scholarship to attend Stanford University. During her college years, Kerri continued to impress, earning All-American first-team honors in four consecutive years, becoming the second college volleyball player in history to do so. Today, she is still considered to be one of the best college volleyball players in history. Walsh eventually graduated with a B.A. in American Studies.

After graduating from Stanford in 2001, Kerri formed a partnership with Misty May Treanor. They initially competed on the beach circuit, finishing the season as the fifth-highest ranked team in the world. Walsh and Kerri continue to compete on the US AVP Tour and the FIVB World Tour. By 2002, they had achieved the number-one world ranking. Throughout 2003, they won every single tournament they entered and won 90 matches in a row. This was a record at the time. During this year, they beat the defending world champions, Brazil. This was despite the fact that they were seen as underdogs. In 2008, they won 112 matches in a row. By this point, Kerri and Misty had won 19 straight titles.

Eventually, Misty retired in 2012. Walsh then partnered with April Ross, with whom she won the 113th title of her career. The new pair then won a gold medal at the FIVB Beach Volleyball World Tour at Long Beach in 2016. After a dispute with AVP, Walsh-Jennings announced that she was not signing a new contract. This caused Ross and Walsh-Jennings to end their partnership. Over the next few years, Kerri partnered with players like Nicole Branagh and Brooke Sweat.

Kerri and Misty are perhaps best known internationally for their Olympic appearances, although Walsh first appeared in the 2000 Olympics before teaming up with May-Treanor. This Olympics proved to be a negative experienced for Kerri, however, as she was given a false positive on a drug test and finished in fourth place alongside the US women's indoor team.

Walsh and Kerri first appeared together during the 2004 Summer Olympics in Athens. They won their first gold medal that year without losing a single set. In 2008, the pair returned to the Summer Games in Beijing, beating the Chinese team in the final match and taking home the gold medal once again. And just like last time, they did not lose a single set. At this point, their unbeaten streak was 108 matches. Then-president George Bush posed with the two women for a photograph during the 2004 Olympics.

The Summer Olympics in London would prove to be the last time Kerri and Misty competed together. They won the gold medal one last time by defeating another US team in an All-American final. After Misty's retirement, Walsh partnered with April Ross at the 2016 Olympics Games in Rio de Janeiro. Kerri and April were able to take home a bronze medal after a tough game against a Brazilian team that had been projected to win the tournament.

Over the course of her career, Kerri has appeared in a number of entertainment projects, including films and television shows. In 2006, she guest-starred in an episode of "CSI: Miami" alongside several other volleyball players. She also appeared in the show "Extreme Dodgeball," joining a team that lost all of their games. In 2009, she appeared alongside Misty in an episode of "Shaq Vs."

Other reality show appearances came with programs like "Hell's Kitchen" and "Celebrity Wife Swap." Kerri has also appeared in an episode of ESPN The Magazine, she runs hosts her own podcast on Sirius Satellite Radio.

Kerri Walsh married pro beach volleyball player Casey Jennings in 2005. They have welcomed three children into the world over the course of their relationships. Kerri was five weeks pregnant during the 2012 London Summer Olympics, and she won a gold medal at this event.

In 2017, it was reported that Walsh and her husband had purchased a home in Manhattan Beach, California. The home features plantation-influenced architecture and was originally built by Jim Obradovich. Kerri and her husband purchased the home for $2.6 million. It features an oversized lot, 3,600 square feet of living space, and five bedrooms. Additional features include large terraces. 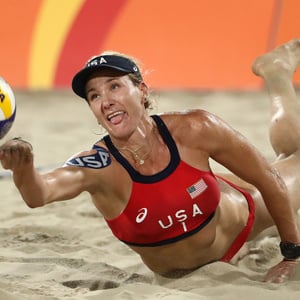