Katarina Witt net worth: Katarina Witt is a retired figure skater and model who has a net worth of $9 million. Katarina Witt has earned her net worth through years of figure skating competitions, her appearances on television and in films, as well as author of the novel "Only With Passion.

She came in 14th in the European Championships and in East German Championships in 1978-79 when she was a child of twelve or thirteen. Since then she has entered in several competitions. She has won two Olympic Gold Medals for East Germany in the women's figure skating competition in 1984 and 1988. In the 1988 she competed with Debi Thomas for the title and both skaters performed to the music from the opera, "Carmen. This intense competition became known as "The Battle of the Carmens. In 1988 Witt went on tour with another figure skating gold medalist, Brian Boitano, with their very successful show "Witt and Boitano Skating. She also performed in "Holiday on Ice" in both the U.S. and Western Europe. In 1989 she began acting with a role in the film "Carmen on Ice. She has also appeared in films such as "Princess on Ice," (German film) in which she performed the theme song, "Skate With Me," as well as having a small role in the film "Ronin. She has also appeared in the TV comedy "Arli$$," the TV series "V.I.P. and made a cameo appearance in the film "Jerry McGuire. Along with her many other accomplishments, she has written a novel entitled "Only With Passion" as well as having her own television show "Stars on Ice" at ProSieben, in Germany. In the beginning of 2012 she became a judge on the television show "Dancing on Ice" in the UK. Katarina Witt was born in Staaken, East Germany and attended school in Karl-Marx-Stadt and went to Kinder-Und Jugendsportschule. 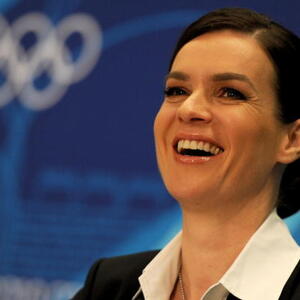