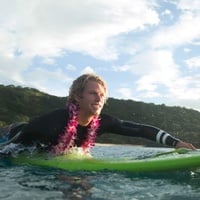 John John Florence net worth and salary: John John Florence is an American professional surfer who has a net worth of $12 million. John John Florence was born in Honolulu, Hawai'i in October 1992. He is known for being dominant in the area of Pipe surfing. Florence won the 2017 World Surf League Men's Championship. He first rode a surfboard at just six months old and started surfing on his own at five years old. His brother Ivan competes on the Big Wave World Tour. John John Florence became the youngest surfer at 13 years old to compete in the Vans Triple Crown of Surfing. By that time he had already won five amateur awards. He suffered a broken back in 2011 and also has broken his leg, wrist, and arm. He won the Vans World Cup of Surfing in 2011 and 2013. His sponsors have included Hurley, Nixon, Stance, Futures, Dakine, and Pyzel surfboards. In 2018 Florence earned $5 million from endorsements and competitions. That was enough to make him the highest-paid surfer on the planet.