Jan Ullrich Net Worth: Jan Ullrich is a German former professional road bicycle racer who won a gold and a silver in the 2000 Summer Olympics. Jan Ullrich who has a net worth of $20 million dollars.

Jan Ullrich was born on December 2, 1973 in Rostock, East Germany where he won his first bicycle race at age 11. He was educated in the sports training system of the German Democratic Republic attending the KJS sports school in Berlin in 1986. In 1988, he was champion of the German Democratic Republic. The school closed two years after the fall of the Berlin wall in 1989 and Ullrich joined an amateur club in Hamburg until 1994. In 1993, aged 19, at the Hamburg club, Ullrich won the Cycling World Amateur Road Championship in Oslo, as Lance Armstrong won the professional championship. Ullrich gave up a place in the 1996 German Olympic team to ride his first Tour de France. In 1997, Ullrich won the Tour de France and He was chosen "sports person of the year" in Germany. n September 2006 Ullrich married Sara Steinhauser, sister of his former teammate and training partner, Tobias Steinhauser. Their first child, Max, was in August 2007. Their second son, Benno, was born in January 2011. Their third son, Toni, was born in October 2012. 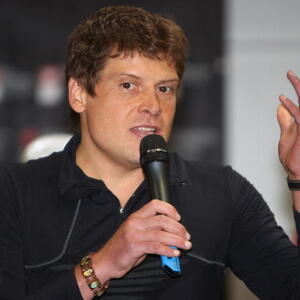