Jamie Anderson net worth: Jamie Anderson is an American professional snowboarder who has a net worth of $4 million dollars. Jamie Anderson was born in South Lake Tahoe, California, and began snowboarding in elementary school. She was homeschooled, which allowed her to focus on her training. She has been a very successful Winter X Games competitor, and has also become popular with sponsors and advertisers.

Over the years, she has won numerous Open competitions, including the Burton European, US, New Zealand, and Australian Opens, as well as the Garnier Fructis Australian Open, and the Nissan X-Trail Nippon Open. She has also been ranked #1 on the Women's Swatch TTR World Tour. She has won four Gold Medals, two Silver medals, and a Bronze at the Winter X Games in Slopestyle, and in February 2014, became the first woman to win a Gold in Slopestyle at the 2014 Olympics in Sochi. In 2015, she appeared on the NBC reality series, Celebrity Apprentice with Donald Trump where she competed against fellow cast members in business-related challenges. At the 2018 Olympics in Pyeongchang, Jamie Anderson defended her gold medal win by winning it again. She is the first female snowboarder to win two Olympic gold medals. 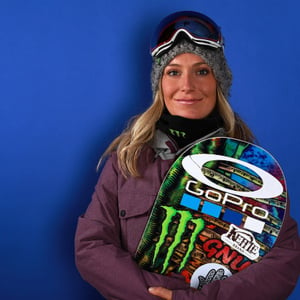