Greg Louganis Net Worth: Greg Louganis is an American Olympian who has a net worth of $1 million. Louganis competed in the Summer Olympics in 1976, 1984, and 1988 and has won two gold medals in springboard diving and two in platform diving. In 1988, Greg tested positive for HIV, and he wrote about his experience in the bestselling book "Breaking the Surface," which was published in 1996. That year, Showtime told his life story in an original movie, "Breaking the Surface: The Greg Louganis Story," starring Mario Lopez.

Louganis has appeared in several films, including "D2: The Mighty Ducks" (1994) and "It's My Party" (1996). After his retirement from diving, Greg turned his focus toward training dogs and competing in dog agility competitions, and he co-wrote the 1999 book "For the Life of Your Dog: A Complete Guide to Having a Dog From Adoption and Birth Through Sickness and Health." Since 2010, Louganis has coached divers in Fullerton, California, and he mentored the U.S. Olympic Diving Team at the 2012 London Olympics and the 2016 Rio de Janeiro Olympics.

Early Life: Gregory Efthimios Louganis was born on January 29, 1960, in El Cajon, California. He was born to teenage parents and was adopted by Frances and Peter Louganis at 9 months old. When Greg was 18 months old, his parents enrolled him in gymnastics, dance, and acrobatics classes, and he was competing by the age of 3. Louganis, who was diagnosed with allergies and asthma during his childhood, also enjoyed trampolining, and he began taking diving lessons at age 9. He studied at Valhalla High School, Mission Viejo High School, and Santa Ana High School, and he enrolled at the University of Miami in 1978. Two years later, Louganis transferred to a college that was closer to home, the University of California, Irvine, and he majored in theatre and minored in dance, graduating in 1983.

Diving Career: Greg was coached by Olympic champion Dr. Sammy Lee and participated in the 1976 Summer Olympics at the age of 16. He was runner-up to Klaus Dibiasi in the tower event, and after Dibiasi retired, Louganis won the world title in the tower event in 1978. Greg was expected to win two gold medals in the 1980 Summer Olympics, but America boycotted the Moscow Games due to the Soviet Union's invasion of Afghanistan, so he wasn't able to compete. In 1982, Louganis won two gold medals at the FINA World Aquatics Championships in Guayaquil and received a perfect score from all seven judges. He then competed at the 1984 Summer Olympics in Los Angeles, winning gold medals in 3m Springboard and 10m Platform. Greg repeated this feat at the 1988 Summer Olympics in Seoul, despite the fact that he suffered a concussion after hitting his head on the springboard during the event's preliminary rounds. That year, Louganis was named "Athlete of the Year" by ABC's "Wide World of Sports." Greg also won gold medals at the 1978 and 1986 FINA World Aquatics Championships, the 1979, 1983, and 1987 Pan American Games, and the 1983 Summer Universiade. Louganis signed an endorsement deal with Speedo after his Olympic victories, and it lasted until 2007. In 2016, his image graced boxes of Wheaties cereal as part of the brand's "Legends" series.

Personal Life:  Greg was in a relationship with his manager, R. James Babbitt, from 1983 to 1989. He has said that the relationship was abusive and that Babbitt raped him at knifepoint in 1983. According to Greg, James also kept 80% of his earnings. In 1988, six months prior to the Olympics, Louganis was diagnosed with HIV, which he contracted from Babbitt. Greg took out a restraining order against him in 1989, and James died of AIDS the following year. In 1993, Louganis was so sure that he would die of AIDS that he threw a "final birthday party" when he turned 33 as a way of saying goodbye to his loved ones. He publicly came out as homosexual in 1994 in an announcement that was shown at the opening ceremony of the Gay Games, and in 1995, he announced his HIV diagnosis. Greg married paralegal Johnny Chaillot on October 12, 2013.

Louganis is an advocate for gay rights and HIV awareness, and he has worked with Human Rights Campaign to fight for the rights of the LGBT community and people living with HIV/AIDS. He also serves on the board of directors for the Princess Charlene of Monaco Foundation; the foundation's mission is to "raise public awareness about the dangers of water, teach children preventive measures, and teach them to swim."

Awards and Honors: In 1984, the Amateur Athletic Union presented Greg with the James E. Sullivan Award, naming him America's best amateur athlete. He was inducted into the California Sports Hall of Fame and the National Gay and Lesbian Sports Hall in 2013. In 2015, Louganis served as a torch bearer at the World Games Special Olympics in Los Angeles and received the Bonham Centre Award from The Mark S. Bonham Centre for Sexual Diversity Studies. In 2017, Greg was a Grand Marshal of the Rose Parade in Pasadena.

Real Estate: In July 2014, Greg sold his 3,385 square foot Malibu home for $1.8 million. He had originally put it on the rental market for $15,000 per month, then listed it for sale at nearly $3 million. According to the home's Realtor.com listing, the property includes ocean views and a "custom swimming pool with a diving platform built for an Olympic Gold Medalist – complete with the "Olympic Circles" symbol painted on the bottom of the pool." 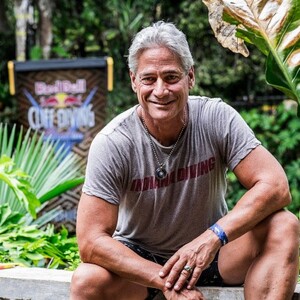