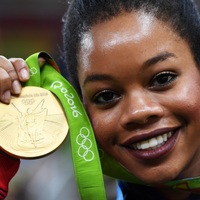 What is Gabby Douglas' Net Worth?

Gabrielle Christina Victoria Douglas was born on December 31, 1995, in Newport News, Virginia. She was raised in Virginia Beach by her parents, Timothy Douglas and Natalie Hawkins-Douglas. She has three older siblings: sisters Arielle and Joyelle, and brother Johnathan.

Douglas first began practicing gymnastics when she was six years old, after her sister persuaded their mother to enroll her in gymnastics classes. She progressed quickly through her training, and by the time she was eight years old, she had won the Level 4 all-around gymnastics title at the 2004 Virginia State Championships. Her future in gymnastics looked very promising, so when she was fourteen years old she moved to Des Moines, Iowa, in order to be able to train full-time with renowned gymnastics coach Liang Chow, although her family remained in Virginia. During her time in Iowa, she lived with Travis and Missy Parton, along with their four daughters; one of the Parton girls also trained with Chow. Due to her rigorous training schedule, she has been homeschooled since third grade. 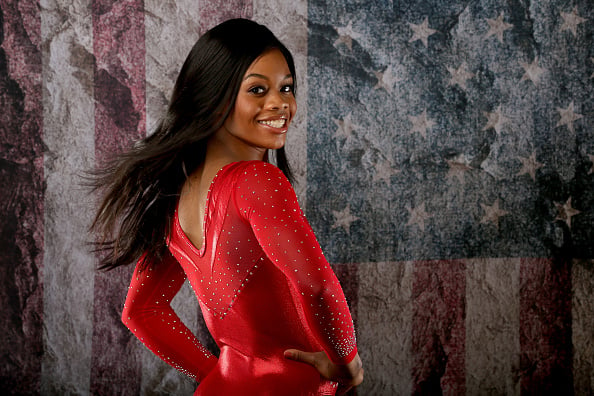 In 2008, Douglas made her international debut at the US Classic in Houston, Texas. At that event, she placed 10th in the all-around rankings. That same year, she placed 16th at the 2008 Visa Championships in Boston, Massachusetts. Because of her rankings, she was not eligible for the 2008 Junior Women's National Team. Then, in 2009 she suffered a setback when she fractured the growth plate of her wrist. The injury caused her to miss the 2009 Covergirl US Classic, and was unable to perform to her full potential at the 2009 Visa Championships (she only competed on balance beam and floor exercise). During the rest of her junior gymnastics career, she competed at events including the 2010 Nastia Liukin Supergirl Cup, the 2010 Pan American Championships, and the 2010 CoverGirl Classic (which was her first elite meet).

She moved on to her senior gymnastics career in 2011, when she was part of the US team that won gold at the City of Jesolo Trophy in Italy, and also the US team that won gold at the 2011 World Championships. She also performed well as a solo competitor, winning silver in uneven bars at the CoverGirl Classic in Chicago that year, and tying for bronze on bars at the 2011 US National Championships. Then, at the AT&T American Cup in 2012, she received the highest total all-around score in the women's competition, despite only being an alternate. The year 2012 only continued to get better for Douglas, as she was a member of the US team that won gold at the Pacific Rim Championships; won gold in uneven bars, silver in the all-around, and bronze in floor at the US National Championships; and then secured the only guaranteed spot on the US women's Olympic gymnastics team when she placed first in the all-around at the 2012 Olympic Trials.

Douglas represented the USA at the 2012 Summer Olympics in London along with her fellow teammates, Jordyn Wieber, McKayla Maroney, Aly Raisman, and Kyla Ross. Together, they were known as the "Fierce Five", and they won the team event gold medal at the London Olympics. This was the first time the American team won gold in the team event since the "Magnificent Seven" (including gymnasts like Shannon Miller, Dominique Moceanu, Kerri Strug, and Dominique Dawes) did so in 1996 at the Summer Olympics in Atlanta. Her Olympic success did not stop there. At the 2012 Summer Olympics, Douglas also won gold in the individual all-around event. She made history with this win, as the first African-American woman (and woman of color of any nationality) to win this event, and also only the fourth American woman to do so. Furthermore, she is the first American gymnast in history to win the team and individual all-around gold medal at the same Olympics. 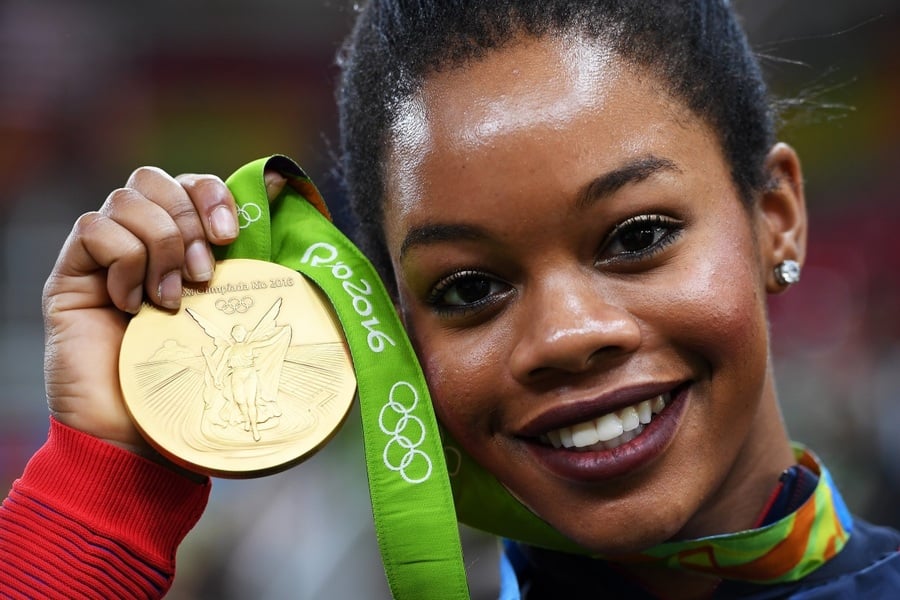 After the London Olympics, Douglas continued to train hard and compete in various international and national competitions, and returned to the 2016 Summer Olympics in Rio de Janeiro as a member of the US women's gymnastics team. At the 2016 Olympics, she won her third Olympic gold medal in the team event as part of the "Final Five", with Simone Biles, Laurie Hernandez, Madison Kocian, and Aly Raisman.

Other Work and Projects

Outside of competing, Douglas has engaged in various other pursuits and projects. One of these projects is an autobiography, "Grace, Gold, and Glory: My Leap of Faith", which was released in December 2012 and debuted at No. 4 on The New York Times Young Adult Bestseller List. She followed this up with her second book, "Raising the Bar", in 2013. In 2012, it was announced that she would appear in an ad campaign for the Nintendo video game, "New Super Mario Bros. 2".

In 2013, she appeared on the Disney XD show "Kickin It"; other acting roles she has had include on the show "Undercover Boss" in 2018. Additionally, the Lifetime television movie "The Gabby Douglas Story" aired on Feburary 1, 2014. The film starred Imani Hakim, and featured Douglas performing all of the gymnastics stunts.

Her own reality show, "Douglas Family Gold", premiered on the Oxygen channel in May 2016. Furthermore, on July 11, 2016, exactly the day after she was named to the 2016 American Olympic team for gymnastics, she debuted her new Barbie Shero "Gymnast Barbie" doll, which was modeled after her.