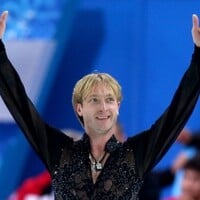 Evgeni Plushenko net worth: Evgeni Plushenko is a Russian figure skater who has a net worth of $10 million dollars. Evgeni Plushenko was born in Solnechny, Khabarovsk Krai, Russian SFSR, Soviet Union, and began skating before he started kindergarten. He showed promise very quickly, and by his early teens, he'd become the youngest World Junior Champion and World medalist, ever. By 2000, he'd begun to dominate men's skating. He went on to win four Gold medals, two Silver medals, and a Bronze at the Grand Prix Final; seven Gold medals and three Silver medals at the European Championships; three Gold medals, a Silver medal, and a Bronze medal at the European Championships; and a Gold and two Silvers as a singles competitor and one Team Gold medal at the Olympics. Known as a charismatic and powerful skater, his return to the 2014 Olympics was highly anticipated. However, he has been plagued by injuries over the last few years, and was forced to withdraw from the singles competition while at the Olympics. He announced his retirement from competitive skating later that day.