Evan Lysacek net worth: Evan Lysacek is an American figure skater who has a net worth of $4 million. Evan Lysacek was born in Chicago, Illinois in June 1985. In high school Evan earned the Presidential Award for Academic Excellence. He started skating at eight years old after his grandmother bought him skates for Christmas.

He was enrolled in figure skating lessons because he wanted to play hockey. He won the U.S. national title at the Juvenile level in 1996. He moved up to Intermediate in 1997 at the Junior Olympics. At thirteen years old Evan won the U.S. Novice title at the 1999 U.S. Championships. In 2005 and 2007 he was a Four Continents champion. He was a U.S. national champion in 2007 and 2008. In 2009 he was the Grand Prix Final champion and a World champion, and in 2010 he was Olympic champion. He also competed for the U.S. Olympic team in the 2006 Winter Olympics. He was named Sportsman of the Year in 2010 by the United States Olympic Committee. The same year he was awarded the James E. Sullivan Award for being the best U.S. amateur athlete. He has been sponsored by AT&T, Coca-Cola, and Ralph Lauren. He finished second as a contestant on Dancing with the Stars in 2010. 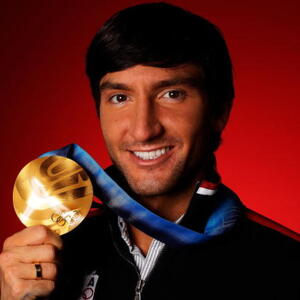