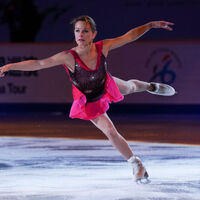 Ekaterina Gordeeva net worth: Ekaterina Gordeeva is a retired Russian figure skater who has a net worth of $10 million dollars. Ekaterina Gordeeva was born in Moscow, Russian SFSR, Soviet Union, and began skating before she started kindergarten. Her father was a professional dancer and encouraged her interest in movement from a young age. When she first started skating, she had to wear multiple pairs of socks inside skates that were much too big, because there were no skates available that were small enough for her to wear. She was paired with figure skater Sergei Grinkov when she was eleven, and by the mid-80s, it was clear that they were the pair to beat. They went on to place first or second in every major competition they competed in for the next 10 years. Including winning every Junior title, and four World Championships, three European Championships, and two Gold medals as Senior competitors. They also won multiple professional titles. They eventually married and had one child, as well. Sergei Grinkov died of a massive heart attack on the ice in November of 1995. Ekaterina Goordeva has largely retired from competition, but still performs as a soloist on occasion, and in pairs exhibitions with her second husband, figure skater Ilia Kulik.