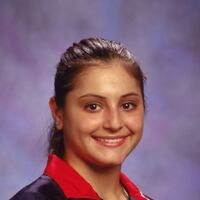 Dominique Moceanu net worth and career earnings: Dominique Moceanu is a former American gymnast who has a net worth of $2 million. Dominique Moceanu was born in Hollywood, Florida in September 1981. She is best known for being a member of the Olympic Gold medal winning U.S. Women's Gymnastics team from 1996 in Atlanta. Moceanu was known for her daring tricks on the balance beam and her spunky presentations on the floor exercise. She competed on the national team from 1992 to 2000 and from 2004 to 2006. Moceanu won Gold Medals at the Olympic Games and Goodwill Games. She also won a Silver and Bronze at the World Championships. Moceanu also won three Gold Medals, two Silver Medals, and four Bronze Medals at the U.S. Senior National Championships. She has continued participating in gymnastics exhibitions and coached the sport and authored the book Off Balance. Dominique has been married to Michael Canales since 2006.