While at UCLA, Harper won the sprint hurdles event at the US Junior Championships as well as at the Pan American Junior Athletics Championships. She was an All American at the NCAA Women's Outdoor Track and Field Championship in 2004. Harper won a Gold Medal at the 2008 Beijing Olympic games representing the United States in 100 meter hurdles. She won a Silver Medal in the same event at the 2012 London Olympic Games and won a bronze at the 2011 Daegu World Championships. She became the first American who has ever won a Gold at an Olympics and then won any medal at the following Olympics. Harper is trained by husband of Jackie Joyner-Kersee, Bob Kersee. 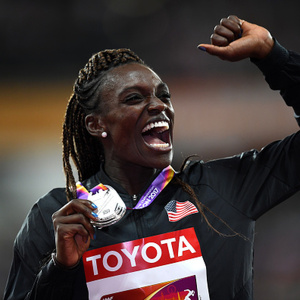