What is Carl Lewis' Net Worth?

Carl Lewis is a retired American track and field athlete who has a net worth of $8 million. Carl Lewis is best known for dominating track and field athletics in the eighties and nineties. He won nine Olympic gold medals and ten World Championship medals. At the peak of his career Carl was one of the most popular athletes on the planet. As we detail later in this article, Carl famously never received the size or number of endorsement deals he deserved at the peak of his career. Carl turned down a number of lucrative deals before his famous 1984 Olympics and then was not offered deals after the games were over due to a number of perceived controversies.

Carl Lewis was born on July 1st, 1961 in Birmingham, Alabama. His mother was a hurdler on the 1951 Pan Am team. His parents started the Willingboro Track Club in 1969, which was instrumental in the development of him and his siblings' as athletes. His father coached girls track at John F. Kennedy High School in Willingboro and was named New Jersey Track Coach of the Year in 1979. His father was his track coach until he was thirteen and began training under coaches Andy Dudek and Paul Minore at Willingboro High School. At that age, he was only competing in the long jump.

Carl was scouted by his pick of large universities and chose to enroll at the University of Houston where he trained under Coach Tom Tellez. Only days after graduating, he broke his high school long jump record with a 26 ft 8 in leap, and at the time he was ranked fifth in the world. Prior to beginning at the University of Houston, he had a flare up of an old knee injury that threatened his sports career, but he worked with Coach Tellez to adjust his technique and was able to continue performing without pain.

Once he had his knee issue managed, he went on to win the 1980 NCAA championship with a wind-assisted long jump of 27ft 4 ½ in. Although his primary event was the long jump, he was also becoming skilled as a sprinter during this time. He qualified for the American team for the 1980 Olympics but did not go due to the US boycott. He instead attended the Liberty Bell Classic, which was held for nations boycotting the Olympics, and he won a bronze medal in the long jump and a gold with the American team in the 4 X 100 m relay. He received a special Congressional Gold Medal, which was created for athletes precluded from competing in that year's Olympics. At the conclusion of 1980, he was ranked as the sixth in the world in the long jump and seventh in the 100 m sprint. 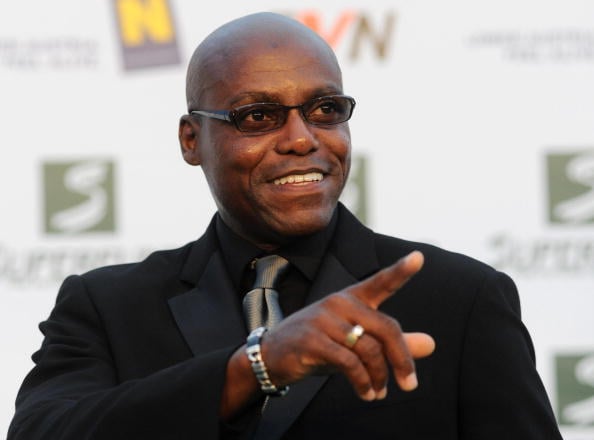 Despite still being a teenager, he broke his personal best at the 1981 Track and Field Outdoor Championships jumping 28 ft 3 ¼ in. He claimed the title of fastest 100 m sprinter in the world at the Southwest Conference Championships with a time of 10 seconds. He finished the year by winning national titles in both the long jump and 100 m sprint, and he received the James E. Sullivan Award, which is given to the top amateur US athlete. His time for the 100 m sprint was the third fastest recorded in history. He maintained this high level of achievement throughout 1982, and in 1983, he competed in the first International Association of Athletics Federations (IAAF) sanctioned World Championships. He won a gold medal in both the long jump and the 100 m sprint, and he was ranked no. 1 in both categories by the end of the year. He was named Athlete of the Year by Track and Field News magazine for the second time in a row. He had the opportunity to compete in four events at the 1984 Olympics being held in Los Angeles. He won four gold medals for the USA team. The track events drew a large crowd because of the energetic public speculation about whether Lewis would break Bob Beaumon's 29 ft 2 ¼ inch world record held for longest jump. Lewis declined to attempt to break the record, which disappointed fans.

Despite his incredible successes at the Olympics, Lewis was met with fewer sponsorship and endorsement offers than he had anticipated to receive. He was criticized by other athletes for lacking humility, and he was criticized by spectators for not trying to break Beaumon's long jump record. There was widespread speculation that he was gay, and although other athletes at the Olympics considered that a nonissue, the suggestion decreased his marketability. Prior to the Olympics, he had been offered an endorsement deal with Coca-Cola, but believing that he would be worth more after the Olympics, Lewis had declined it. After the Olympics, Coca-Cola rescinded the offer. Nike also dropped him from his sponsorship deal. By the end of the year, Lewis was ranked as the top long jumper in the world, and he had been named Athlete of the Year by Track and Field Magazine for the third time in a row. Although he had never played football or basketball, Lewis was drafted by the Chicago Bulls and the Dallas Cowboys. He didn't go on to play in either league.

At the 1987 World Championships he faced more difficult challengers, and although he beat the world record in the 100 m, his opponent, Ben Johnson, had set a new world record. Lewis speculated to the media that drugs were involved, and in the 1988 Olympics, he was proved to be correct. He competed against Johnson again in the 100m, and Johnson won. However, days later he failed a drug test, and the gold medal went to Lewis. At the 1991 World Championships, Lewis set a new world record for the 100 m sprint. His record would hold for three years.

Despite being one of the most famous athletes on the planet following his amazing performance at the 1984 Olympics, Carl Lewis did not find himself showered in endorsement deals. There were rumors that Carl's lack of endorsements was due to rumors that he was gay and a perceived attitude problem/arrogance/aloofness. Coca-Cola offered Carl a lucrative contract before the games, which he turned down hoping to sign an even more lucrative deal after bringing home several gold medals. Coca-Cola reportedly did not have an offer for him after the games.

In 1984 Carl earned $500,000 from endorsements and $200 thousand from appearance fees and tournament prizes for a total of $700,000. That's the same as around $2 million in today's dollars. By comparison, fellow 1984 Olympian Mary Lou Retton earned several million dollars (equal to tens of millions) thanks to endorsements with Wheaties, McDonald's and Vidal Sassoon, all of which passed on Carl.

Carl was popular outside of America, especially in Europe and Japan where he signed deals with dozens of companies, notably Fuji, Mizuno and Sagawa Express and Ecco (the Scandinavian shoe company). He did sign a handful of deals targeted at American fans including TAG/Heuer, U.S. Mint and Disney.

Carl was a Nike athlete at the 1984 Olympics. Their relationship came to a contentious end at some point between 1984 and 1988 after Nike reportedly saw Carl wearing gear from other brands at events on a number of occasions. In the end the two sides found themselves in court where they reached a confidential settlement to end their contract. Carl then signed a deal with Mizuno.

During these peak years, Carl routinely earned $30-50 thousand to show up to track events. He could do this a dozen times a year.

Speaking to the LA Times in 1988 ahead of the Seoul, Carl explained his thoughts on the lack of endorsements:

"Everywhere I looked, there were stories about how I blew it or about how I could double my endorsements. That was the main talk of the last Olympics–who's going to cash in? But great athletes, at any level, have to have objectives beyond that of cashing in.

You'd have to be crazy to think that when Larry Bird shoots a pressure basket, he says to himself: 'Well, that's another $400,000 in endorsements.' After the 1984 Olympics, my objective wasn't to win a billion endorsements. My goal was to get back on the 1988 team. And I've accomplished that."

After being plagued by injuries and slowed due to age, Lewis retired from track and field in 1997. He has served as the track coach for the University of Houston since 2018.